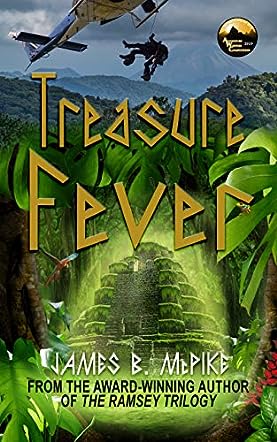 McPike's 6th action/adventure spy/thriller TREASURE FEVER: The Hunt for El Dorado is out now! If you like Mission: Impossible or Jason Bourne give this book a try. It was named a Top-10 semi-finalist in Clive Cussler's Adventure Writer's Competition and Red City Review gave it 5-stars, calling it "a real goldmine of a book". His last book SHIPWRECK ISLAND was based on a real 19th century New Zealand shipwreck that went missing--along with its legendary gold cargo.

McPike's previous mystery/thriller THE EMERALD CAVE was the grand finale in the acclaimed Ramsey trilogy six years in the making. The book reveals hidden secrets about the Grail and where it might be today. The prior book in the series THE LOST PROPHET was the winner of multiple literary awards, including the Pacific Book Award for Christian Mystery/Thrillers and the Beverly Hills Book Award for Religion fiction.

He is a member of the International Thriller Writers. His favorite authors are David Morrell, Charles L. Grant, and Preston & Child. He's traveled the world from Switzerland to Aruba to New Zealand. He lives near Yosemite where he enjoys the great outdoors and wonderful local cuisine. Readers can follow him on Twitter @JMcPikeAuthor or reach him at mcpike@gmx.com

Treasure Fever: The Hunt for El Dorado is an action and adventure thriller novel written by James B. McPike. Max Finley knew his superior at the NSA would have loaded the training exercise sprung upon him with the unexpected and the unpredictable, so moving the time he had to complete it forward was not entirely surprising. What Edgar Morrison had in mind for Finley’s next assignment, however, was. As Morrison was reviewing Finley’s performance in the exercise, a well-groomed government type had been quietly standing by and observing. When his presence there was noted, he suggested they refer to him as David Copperfield, for lack of a more apt label, and he indicated that he wanted Finley to travel to Caracas and bring back an “asset.”

As Copperfield handed him the photograph of the woman they were discussing, Finley was startled by his recognition of her. Lexa Tantaros was an archaeologist whose world-wide expeditions were, as far as Finley knew, for the betterment of mankind. He wondered how had she merited this kind of attention. The fact that Copperfield dangled the name of Dean Spader, an unscrupulous and unethical NSA operative, as his alternative, was even more incentive for Finley to take on what would turn out to be anything but a routine assignment.

James B. McPike’s adventure thriller, Treasure Fever: The Hunt for El Dorado, is a fast-paced and exciting tale that will thrill anyone who enjoys archaeological novels of suspense. Finley and Tantaros are marvelous characters to follow, and the dastardly Spader is a suitably dark counterweight for them. McPike’s plot is imaginative and unpredictable. I particularly enjoyed following along as Finley and Tantaros travel through the tropical rainforest to reach the Sacred Valley of the Incas. The author makes this expedition feel real, making this book quite difficult to put down until it’s finished. Treasure Fever: The Hunt for El Dorado is most highly recommended.