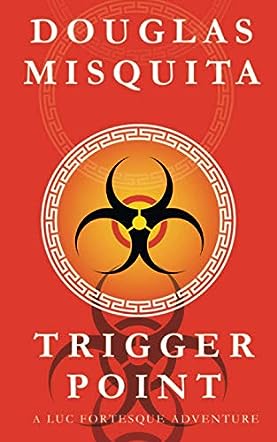 Douglas Misquita is an action thriller novelist. He wrote his first story at the age of 13 on a 100-page school exercise book and drafted his debut novel in engineering college. Since 2010, he has released a book every year. His books have won Gold and Silver Literary Titan awards; and accolades from readersfavorite.com, therealbookspy.com and bestthrillers.com for their pace, visuals, interwoven plots and relevance to contemporary world events.
He lives in Mumbai, India with his family and guitars.

Trigger Point by Douglas Misquita is A Luc Fortesque adventure thriller. Luc Fortescue is under an Interpol Red Notice and he possesses knowledge about a terrorist plot that not only puts the world under huge threat but also incriminates the Holy See. Now Luc is being hunted for that knowledge. Special ops forces are closing in on him and so is the Vatican’s L’Entity, one of the oldest espionage agencies in the world. Raymond Garrett is a former DEA agent and he takes an off-the-books mission to bring down El Fantasma, a Colombian drug lord. But El Fantasma also has a mission for Garrett. As corruption and treachery run deep through government and religion, it's down to Fortescue and Garrett to cut through it. Facing their pasts, they must survive the confrontation to be successful.

Trigger Point by Douglas Misquita is the third book in the Luc Fortescue adventure thriller series. I haven’t read the first two but this one seems as though it could be read as a standalone. However, as with any series, readers should really read all the books in order. This one is packed with action, kicking off right at the start and ramping up as the story evolves. It is a long book but it's one that you won't want to put down. The plot flows smoothly with plenty of twists, turns, and heart-stopping action and the characters are wonderful – really well-developed into real people with real lives and flaws. Once you start reading, you will become so invested in the story that everything else will slide by as the author draws you inexorably into his web. If lockdown has left you with time on your hands and you want to go somewhere different, pick up this book – you won’t be disappointed.