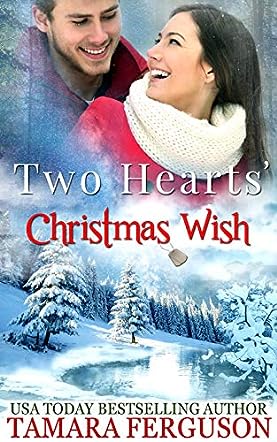 Writing steamy yet sweet compassionate stories of fate that are wonderfully romantic, Tamara Ferguson is the multi-award winning, #1 international bestselling author of the Tales of the Dragonfly Romance Suspense Series, the Kissed By Fate Series, the Two Hearts Wounded Warrior Romance Series and the Daydreams & Dragonflies Sweet Romance Series.
Her latest release is A Kiss Upon A Star, a sweet romance which has become a #1 International Bestseller.
Another new release is the #1 bestseller Hunks to the Rescue: 18 Hot Contemporary Romance Novellas which includes That Unexpected Kiss, the second in the Kissed By Fate series. Hunks is a #1 Nook Book in Steamy Romance and Romance anthologies.
Her wounded warrior romances, Two Hearts Unspoken, Two Hearts Surrendered, and Two Hearts Undone were all WINNERS at the 2016 Readers’ Favorite International Book Awards; with Two Hearts Unspoken earning the Silver Medal in Military Fiction. Two Hearts Surrendered is also a 2016 New Apple Romance Selection for excellence in Indie Publishing.
Two Hearts’ Christmas Wish, the fourth story in the series, spent 6 consecutive weeks at #1 in the Mistletoe Kisses & Christmas Wishes romance set and has just become a #1 Best Seller independently.
Along with the 2015 Romance Reviews Readers’ Choice Award Winner That Unforgettable Kiss, Two Hearts Surrendered and Two Hearts Unspoken were also finalists for the 2016 IAN Book of The Year. Tales of the Dragonfly In Tandem was a romance finalist in the Indie Excellence Awards, while Tales of the Dragonfly In Flight was a romance suspense winner at the Readers' Favorite International Book Awards.
.

Two Hearts' Christmas Wish: Two Hearts Wounded Warrior Romance, Book 4 is a military fiction novel written by Tamara Ferguson. Air Force Captain Jason Matthews’ squadron had completed their tour and were getting ready to go home, but a surprise attack on their planes moments before a last bomb drop was scheduled to take place left two Raptors in flames and three pilots badly injured. Jason’s efforts to save Zach Logan, who had been trapped in his cockpit, had left him with an irreparably injured hand, though he was thankful that he had not been as badly injured as Zach or Luke, who both had sustained significant burns. When he was finally released from the German hospital the three had been transported to, his musings about what to do with the rest of his life were interrupted by a most unexpected dream. His parents and anyone else would have thought his dreams would be recreations of the horrific events at the airbase, but this dream was about Kat Conlin, the thirteen-year-old girl he had been tasked with showing around Crystal Rock while she and her parents were vacationing there. Jason was sixteen at the time and had had no interest whatsoever in babysitting a little girl. Kat was likewise disappointed that the totally hot boy who was supposed to be her companion would be so boring, but then something happened. Maybe it was a bit of the magic that filters through the air, the water and the trees at Dragonfly Pointe, but by the time Kat and the Conlins were ready to leave, the two teens had fallen in love, even though they realized they’d probably never see each other again. Reliving those moments fourteen years ago gave him a renewed focus, and he knew what he had to do.

Tamara Ferguson’s military fiction novel, Two Hearts' Christmas Wish: Two Hearts Wounded Warrior Romance, Book 4, follows the reunion of Jason and Kat in that magical town of Crystal Rock. I’m a big fan of Crystal Rock in general, and Dragonfly Pointe in particular, and loved having the opportunity to be there during a very special Christmas. Ferguson’s emphasis in this story, as with the other stories in her series, is on returning veterans, especially wounded warriors. Each of her stories is inspiring and helps make it certain that the service and sacrifices of these servicemen and women are not forgotten, if only by her readers. I empathized with the young Jason who had found Kat entirely too attractive for her young age and jail bait status, and loved seeing the parallels between that long-remembered week and their reunion during the Christmas festivities. Ferguson’s plot is first-rate, and her characters soon felt like old friends one would want to spend more time with. Two Hearts' Christmas Wish: Two Hearts Wounded Warrior Romance, Book 4 is most highly recommended.

What do you do when you can’t stop thinking about the girl who stole your heart when you were seventeen? That’s the question Jason must answer in Two Hearts' Christmas Wish. After being wounded while serving his country, dreams of a young girl he’d kissed under the mistletoe keep him company. But learning that she’s in a serious relationship makes it difficult to reunite with his old friend, never mind rekindle what might have been between them. Tamara Ferguson does a good job of letting the reader see exactly what there was between a young Jason and Kat before they grew up and life got in the way, so you know exactly what the stakes are this time around.

Kat finally realized that her relationship wasn’t really something she wanted, especially when her boyfriend won’t even make time to visit her family for the holidays. Back at the Dragonfly Pointe Inn, she unexpectedly runs into her old crush who broke her teenage heart when he stopped writing to her all those years ago. A few days together in a winter paradise helped them realize that the time apart was exactly what they needed. Tamara Ferguson does a good job of describing the area and the people so you feel as though you’re also there in Dragonfly Pointe Inn. Two Hearts' Christmas Wish is a fun second chance holiday romance that kept me smiling until the end.

Two Hearts’ Christmas Wish is the fourth book in the Two Hearts Wounded Warrior Romance series, written by Tamara Ferguson. Jason Matthews and his former girlfriend, Ashley, had made a very poor first impression on Kat Conlin at the beach that day. By the time Kat and her family were leaving Crystal Rock, however, Jason and Kat were both smitten with each other. Fifteen years later, the two meet again, with Jason having served in Iraq and Kat engaged to be married. Their reunion is unplanned and comes as a shock, but neither had forgotten how they’d felt about one another. As they start to get to know each other again, Kat is brought back to reality when her fiancé unexpectedly walks through the door. Now a decision has to be made, as Kat’s life is derailed once more, and her love for two men changes her life forever.

This wonderfully complex tale of romance about two people, whose lives are pulled in different directions, only to be reunited at a distant intersection, is well-written and pieced together in a way that will leave you begging for more. Tamara Ferguson’s ability to convey the upheaval of emotions, pulling Kat from one reality to the other, is pure magic, creating a realistic combination of treasured memories of the past with optimistic expectations of the future, while forgetting about the unwanted regrets of the present. Jealousies take hold amongst self-doubt and uncertainty, due to the events which have taken place in their fifteen years apart, yet their craving, love and desire for one another does not end. A blend of romance, charity, compassion towards animals and more is what kept my own desire going to read to the very end, and I was shocked by the dramatic conclusion. I very much enjoyed Tamara Ferguson’s incredible love story, Two Hearts’ Christmas Wish, and plan to seek out the other books in the series. I wholeheartedly recommend this book to all readers who enjoy love, drama, action and comedy in this feel-good romance adventure.