Under A Blood Kissed Moon 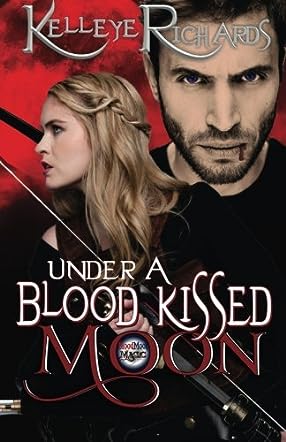 Ember may be a shifter, but she was raised by vampires, and her family is everything to her, which is why she is at an illegal shifter fight. Patrone has threatened her family if she doesn't fight for him, and Ember will do anything to keep her family safe. Tonight's fight is going to be different. Ember can feel it in the air, there is a different scent in the air, something is going on. Thoren hates shifters, and who can blame him? A rogue set of shifters murdered his family and he has vowed revenge, but there is something different about Ember that unsettles him. Under a Blood Kissed Moon is the story of a vampire, Thoren, bent on killing all shifters for the mistakes of those few that destroyed his life and family, and Ember, a shifter raised by vampires, but something completely different than what Thoren was expecting, and he isn't sure how to handle it. Author Kelleye Richards is actually the writing team of authors Anya Kelleye and ER Richards, and they have taken a role playing exercise and developed it into a full book series.

Under a Blood Kissed Moon is the first book in the BloodMoon and Magic series, and it brings vampires, shape shifters and witches together on a wild journey. A unique angle in this book is that Kelleye Richards gives vampires the ability to shape shift as well. This is the first time I have read a book in which a vampire can also shape shift. I found that to be interesting and different, setting it apart from all the other paranormal books out there at the moment. This is definitely an adult novel as there is some sexual content, some violence, fated mates, bonded mates, and even childbirth. Many of these topics most teenagers know about, but I like to warn readers so that no one is caught off guard or offended. This is a paranormal book that doesn't follow the rules of all the other,s and makes you want to read it and future books.