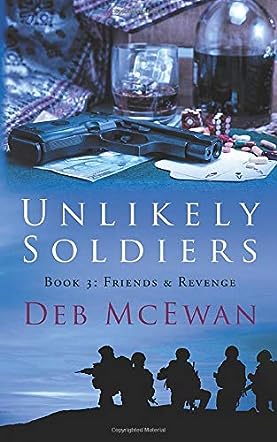 Unlikely Soldiers, Book 3: Friends & Revenge is a military fiction novel written by Deb McEwan. Elaine and Jill knew it wasn’t a legal ceremony, in fact, the Right Reverend Leroy Peters, who was presiding at their ceremony, might not even have been a real minister, but those issues were of no importance in the expression of love they were celebrating with the vows they made. It would be hard for them being separated because of their careers, but they would work all of that out later. Elaine’s friend, Mouse, got married to her boyfriend, Guy, some two weeks later, in a double ceremony with her brother Graham, and his betrothed, Grace, who defied the odds and refused any offers of assistance as she struggled out of her wheelchair to stand alongside him. She would recover in time from the accident that left her in the wheelchair, but she’d ensure that she would be independent and walking as soon as possible. Mouse was stationed at Joint Headquarters in West Germany and couldn’t wait until Guy got posted there. For now, she was living in the singles' accommodations. The presence of Moira Jones, who she had some unpleasant history with, was a troubling aspect of living in the singles. Jones blamed her demotion on Mouse, and worse, Mouse suspected that Jones had some connection with KC Cooke, Mouse’s brutal ex-boyfriend.

Deb McEwan’s military fiction novel, Unlikely Soldiers, Book 3: Friends & Revenge, continues the stories of Elaine and Jill, and Mouse and Guy. This is a seriously good book, that covers important issues, particularly the plight of gay and lesbian military couples in the latter part of the twentieth century who all-too-often have had to choose between their love and their careers, and, at best, had to live a life that was always confined to the shadows. McEwan’s characters have depth and the conflicts they encounter are authentic and real. There are intriguing shades of gray in the world she’s created. While KC is evil personified, Jill’s Aunt Lil, Uncle Billy, and Uncle Billy’s nephew, Earl, whose face was disfigured during his tour of duty, play a major part in the criminal underground, but while flawed are caring, complex people. Friends & Revenge gets the reader involved in the lives of these unlikely soldiers, making it a book you just won’t want to put down. Unlikely Soldiers, Book 3: Friends & Revenge is most highly recommended.

Unlikely Soldiers Book Three: Friends & Revenge by Deb McEwan is the continuation of the story. This time, we get to see a lot more from other characters in the novel and not just the two main protagonists and I love it. I love it when authors give their secondary characters just as much page space as the main protagonists they started their story with. We see what is happening in the lives of every character and that makes it such a wholesome novel.

Mouse is not having an easy time in the army. She has her hands and mind full. She has to deal with an RSM who wants power, the generals in the army are strange, and sometimes she finds it very hard to handle them and her job. And to make things worse there is an officer with some nefarious plans and no one can stop that officer except her. But with all this going on, she has to balance everything and stop the junior officer from wreaking havoc. Guy is working on an investigation that will open old wounds. He has no idea that he is close to finding the person who tried to kill his wife. And the consequences of his investigation and his unawareness will be very bad.

Throughout the novel, we get to read about other characters, including KC, Jill and Elaine. I loved these characters and I enjoyed reading about them. I especially loved the text concentrated on Elaine and Jill; it was heartbreaking at times and so wonderfully funny at others. In true Deb McEwan style, there is a lot of dark humor in the novel and you will enjoy this book just as much as the others. These characters have developed beautifully and, as always, the dialogues reveal so much about the new characters. Book Three in the series lives up to the bar set by the previous two wonderful novels. It was amazing.