Animal Prints on My Soul Life Has Other Plans 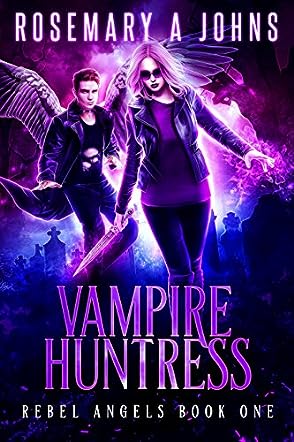 Winner of the Silver Award in the National Wishing Shelf Book Awards. Finalist in the IAN Book of the Year Awards. Honorable Mention in the Readers’ Favorite Book Awards.
Shortlisted in the International Rubery Book awards.

Rosemary is also a traditionally published short story writer. She studied history at Oxford University and ran her own theatre company. She’s always been a rebel…

Want to read more and stay up to date on Rosemary’s newest releases? Sign up for her *VIP* Rebel Newsletter on her website and get a FREE novella!

Vampire Huntress by Rosemary A Johns is book 1 of the Rebel Angels Series. Violet was a normal girl, taken in as a baby after being abandoned in London. Everything changes on the day she turns 21. Suddenly, Violet is awash with powers she never knew she had; Violet is half-angel, half-vampire. On the day she loses her job, an angel falls on her, quite literally, changing her life in ways she never dreamed imaginable. Violet’s adopted sister has disappeared, and Violet must now find her; she must become a Huntress. The deeper into this new life Violet gets, the harder she finds it and now she’s on the run. As the war between the vampires and the angels rages on, there is only one way that Violet can win, only one way to bring her sister back alive – she must let out the monster inside her.

Vampire Huntress by Rosemary A Johns is a great start to a new series. This is a somewhat different take on the usual vampire story, being based in London, so if you are not familiar with British language you might struggle to understand some of this. I am familiar with it and could appreciate the story and understand it. This is a very well-crafted story, interesting and with plenty of action. Unlike some vampire stories that seem to be based entirely in the supernatural world, this has its roots in modern-day Britain and switched effortlessly between the two worlds. The plot is unique, it is twisting and full of surprises and a rare mixture of characters, all well-rounded and likeable. I enjoyed this story very much and would love to read the next in the series.