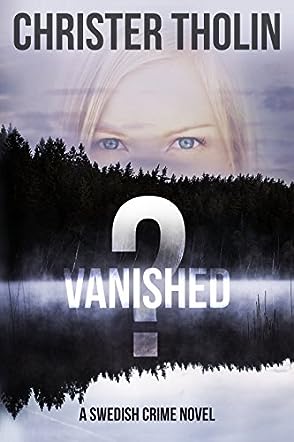 The author grew up in the North of Germany, Schleswig-Holstein. Today, he lives together with his family in Stockholm, Sweden, where he works as management consultant.

Already for ages he has been a great fan of crime stories and therefore, had the desire to write his own crime story with the characters acting in Sweden. This crime-fiction is now available under the title "Vanished?".
The crime novel starts at a slower pace - like Martin's holidays, but the tension goes up more and more. It comes to a number of surprising turns giving new impulses to the story. Apart from that, the lovely country Sweden is described with the view of a foreigner.

In the back of his book Vanished?, author Christer Tholin states that he always wanted to write a Swedish drama, and he’s done just that. We meet Martin, the main character, as he travels to Sweden on holiday shortly after his divorce. He needs time alone to think. He meets Liv, a Swedish lady he’s very attracted to, but after inviting him for coffee, she is nowhere to be seen when he arrives. He returns to her house the next day, but there is no sign of her. He’s attacked, tied up by an unknown intruder, and later, when he reports this to the police, they take no interest. Not content with leaving his questions unanswered, Martin goes in search of Liv in Stockholm, and then hires private detectives to help find her. Without giving any spoilers away, we meet three new characters, including Elin from the agency, who in fact for me becomes the star of the book. I enjoyed her sense of humour, her innovative ways of discovering information in unlikely places, and how she persuades her partner to help solve the case.

I chose Vanished? by Christer Tholin to review because I enjoy stories set in Sweden and its neighbouring countries, and often watch them on television. This book did not disappoint, although it could be described as a cosy mystery. While there was a crime to solve, the hero, Martin, is sensible and does not act out of character. He is a lawyer based in Berlin and does not morph into a Rambo character, but correctly and realistically leaves the case to the people he’s hired to solve it. The characterisation is excellent, I grew to like all of them and could identify with them. This is a down to earth story, both believable and entertaining, and I read it in one sitting. It flows from beginning to end, has been translated into correct English, and I think is worth every one of the five stars.