Sophia Freeman and the Era of Darkness 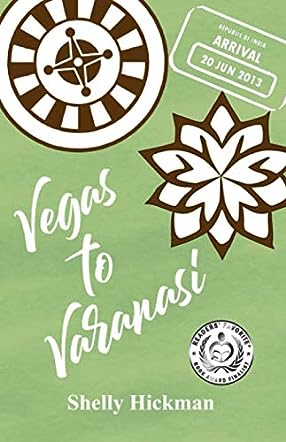 Hello there! A little about me. A long-time Las Vegas native, I spend my days teaching computer technology to hormonal middle schoolers. I live with my husband of 20+ years and have a teenage daughter, grown son, and child of the furry persuasion.

I'm a huge fan of "The Walking Dead" and "Game of Thrones", as well as movies with stupid humor. "Zoolander", "Austin Powers", and "Monty Python" are some of my faves. And if you asked me where the best place in the world is, it would have to be Disneyland. I mean, it *is* the happiest place on Earth.

I love to write about relationships, family as well as romantic, and my aim is to explore life's challenges with honesty and humor. Hearing from readers is such a treat, so please feel free to visit me on Facebook or Twitter, or both!

Vegas to Varanasi: Fortytude Series, Book 1 is a contemporary romantic chick lit novel written by Shelly Hickman. Anna's first and major love had been Luke. They were best friends who went the next step, fell in love and got married. Anna, who had never been intimate with a man before, had no real reason to suppose that the perfunctory and slightly impersonal lovemaking they occasionally indulged in was anything really out of the ordinary. After their second child, however, she realized, without him saying a word, that Luke was gay. She avoided any real relationships with men after their amicable divorce, not wanting to subject their two kids to a boyfriend until they were older. Then Anna met David, a client at the physical therapy center where she worked, and their relationship grew to the point that David came to live with Anna and her now grownup children. But David, a tenured professor and aspiring novelist, became increasingly reticent and reclusive, and was finishing off a significant amount of booze while writing his great novel. Their parting seemed almost a relief to the two of them. Then there was Kiran. Impossibly lovely to look at, and still holding tight to a crush he had had on her from when they were briefly in school together years before. Too good to be true? Anna's optimism has taken a few too many bumps and bruises along the way, but Kiran is quite enticing.

Shelly Hickman's contemporary romance novel, Vegas to Varanasi: Fortytude Series, Book 1 is a heartwarming and humorous look at life after forty. There's the worries Anna has about her kids and their prospective partners, and her own fears about growing old on her own, but Hickman's Anna is more than simply a woman going through a midlife crisis. She's a genuinely likable and compassionate soul, and the reader can't help but hope that she and Kiran will get to live happily ever after. Along the way, Kiran invites Anna to travel with him to India to visit his ailing grandmother and his aunt. Anna's always dreamed of going to India and surprises herself by assenting. Reading about their experiences in India is marvelous! Hickman makes every crowded street in Varanasi and holy ceremony by the Ganges come alive with the flowing and detailed descriptions one would usually expect from a travel writer. Vegas to Varanasi is a quirky, warm, and entertaining novel that is most highly recommended.

Vegas to Varanasi (Fortytude Series Book 1) by Shelly Hickman is a romance novel narrated in the first person by Anna. This is a love story about Anna and Kiran, who were once high school classmates and now happen to meet after 20-something years. Kiran is an Indian guy who dealt with self-esteem issues due to being overweight in high school. At that time, Anna, a plain and nice girl, was one of the few people who were always kind to him. Kiran has always remembered her kindness and, when they happen to meet years later, sparks fly. Kiran, now slimmed down and toned, is instantly attracted to her. Anna, in the meantime, has struggled with a failed marriage, a partner she is no longer in love with, and parenting, and is flattered by Kiran’s attention. Things get more serious and also complicated when Kiran invites Anna to visit Varanasi, India with him. This is their love story.

Vegas to Varanasi (Fortytude Series Book 1) by Shelly Hickman is a nice, easy read and I liked that the chief protagonists, Anna and Kiran, are both likeable and relatable. They both deal with their own issues and get a brand new chance at love. I loved the vivid depiction of Varanasi and India in general as they travel together. There is a background story of ex-boyfriends, tears, and other affairs besides this one, but I found myself focused on Anna and Kiran’s story and rooting for them to find genuine happiness since they are portrayed as such kind and genuine people. All in all, a great romance read.

In Vegas to Varanasi (Fortytude Series Book 1), author Shelly Hickman takes readers on a journey of the love life of 40-something Anna. Before you get worried that this is another love story, I must quickly add that Shelly has smartly added many other realistic elements to the book, like parenting troubles, teenage kids' drama, etc. Anna is a mother of a 20-year-old daughter, Carly, and a 21-year-old boy, Hayden. She has been living with her boyfriend, David. Their romance, however, is dying slowly due to his uncontrolled drinking habits. After many conversations on this topic, Anna has lost hope of any improvement and David moves out of the house.

During this "trouble in paradise" situation, she comes across Kiran. He claims that he was in the same school as Anna, and she was the only one who was polite to him. The rest of the classmates picked on him due to his being overweight. Anna's kindness touched him and he has never been able to forget her. She feels an instant connection with Kiran, but she believes that he is a little out of her league. Unlike in high school, he is now a particularly handsome man. Her dilemma increases ten-fold when Kiran asks her to accompany him to Varanasi, India. Having just broken up with David, she is not sure if she is up for a new relationship so quickly.

One thing that I loved about Vegas to Varanasi (Fortytude Series Book 1) is how relatable its plot is. Although I am nowhere Anna's age, Shelly's beautiful narration helped me in connecting with the leading lady of the book without any trouble. The author has raised two major issues in this romantic novel: 1. How bad alcoholism can be for one's life and relationships! 2. The scars of high school drama can impact on a person's self-confidence for their whole life. The twists do not feel artificial. In fact, many relationships end owing to the misunderstandings faced by Anna and Kiran. One would have to be heartless not to fall in love with Kiran and his modesty. I must admit that from the title of the book I had gotten an idea that I would be reading a lot about the cultural differences of Vegas and Varanasi. However, the tasteful plot was enough for me to overlook that minor issue.