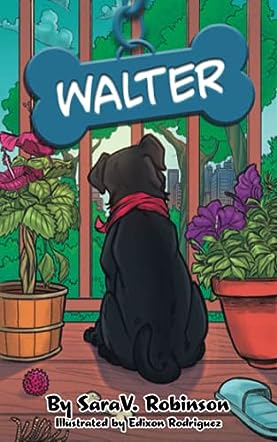 Sara was born in Caracas, Venezuela. She wrote her first short story at the age of ten. Her first published work was "Mecate y Don Julio" with Editorial El Perro y la Rana in 2012, along with the series of short tales "Leamos un Cuento", published on Sundays for a local newspaper in Venezuela. She immigrated to the United States with her son in 2016. Walter is her first book in English. Sara is also a teacher, she is an animal lover and advocate, she loves plants, books, cooking and the beach. Sara lives with her husband Jason Robinson, her son Samuel, and their two dogs, Walter and Rosalia, in Woodstock, Georgia.

Walter by Sara Robinson, with illustrations by Edixon Rodriguez, is a charming story about a young Black Labrador and Terrier mix dog, told from the first-person point of view of the dog whose original name, given to him by his first owner, was Tyler. This first owner was one of those not uncommon humans who, at one time, thought that he wanted a dog, but then it was too much trouble to take proper care of him. Tyler was kept in a fenced-in backyard patio, not allowed into the house, and not always fed on time. Walter (Tyler) was bored most of the time, with nothing to do and no one to play with and, during the winter months, he was often cold, curled up in a tight ball inside the doghouse to keep as much body heat as he could. Then, one day, everything changed because he found out how to get over the tall wooden fence and see the world outside. From that moment on, his life took him to a pound where he was eventually adopted by his new family to live with them ever after. The illustrations are charming pencil drawings that convincingly depict the important elements of the story.

This is a lovely story obviously told by an author who is intimately familiar with dogs. The voice and the tone of the text are believably simple and innocent, portraying the inner world of a dog that wants to belong and be loved by a human family. Anyone who has had dogs for years as pets will recognize the signs without any trouble. The reader will finish the book with a feeling of close connection with a lifeform that isn’t so different from a young human child, who is utterly dependent on adults and has all the emotions of fear, confusion, apprehension, love, and trust. This is a very important book that all children should be exposed to at a young age to learn how to be responsible pet owners and, most of all, teach them empathy for living beings that will depend on him or her one day. I highly recommend Walter by Sara Robinson to both children and their parents.