The Cowboy & the Cheerleader Don of the Q 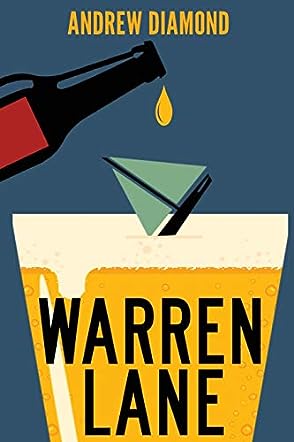 Andrew Diamond's first novel, Warren Lane, a comic noir with shades of mystery, romance and suspense, was published to positive reviews in 2015. His second novel, Impala, a Hitchcock-style suspense/thriller, is due in 2016. When he's not writing fiction, Andrew helps libraries and universities build digital archives. He lives in Charlottesville, VA with his wife and three children.

Warren Lane is a contemporary fiction mystery novel written by Andrew Diamond. Warren Lane was the name of the private investigator Susan Moore hired to tail her husband, Will. She knew, after consulting with her doctor, that he had been unfaithful to her, and she had begun to bitterly regret what she had and hadn’t done with her life. As she sat in the coffee shop, she noticed a somewhat bleary-eyed man watching her and she figured it must be Lane, who she had never met before. When she approached the man, he confirmed her guess and invited her to sit down with him. He took down the pertinent information and accepted her retainer check for ten thousand dollars. The man wasn’t really Warren Lane -- he was actually Mark Ready, a young alcoholic who lived on his friend’s sailboat and was the caretaker of his friend’s home when he was out sailing. On a recent LSD trip, Mark had had an inspiring momentary conviction that saying yes to everything was the answer. Armed with Susan’s check and the details about her philandering husband, Mark was about to prove that this new insight was very true indeed.

Andrew Diamond’s contemporary fiction novel, Warren Lane, is an entertaining dark comedy of errors as the naive and hapless Mark Ready takes on the identity of a sociopathic private investigator. Diamond’s plot is peopled with lost souls wondering just what life has left in store for them and obsessing on their past mistakes and failings. Mark, aka Warren, is an intriguingly uncomplicated, if failed, character who is given a second chance at life by not one, but two women, while at the same time, he intuitively helps each of them recover the dreams they had lost sight of. While appreciating the underlying plot that concerns Will Moore’s import business, I found that the underlying personal tangle of relationships between Mark, Ella, Will’s mistress, and Susan, Will’s wife, was profound and marvelous, lending a coming of age quality to the story as each of these three pivotal characters attempted to find their identity and raison d’etre. Warren Lane is a quirky, intriguing and wholly original read. It’s beautifully written and expertly plotted, and I had a grand time reading it. Warren Lane is most highly recommended.