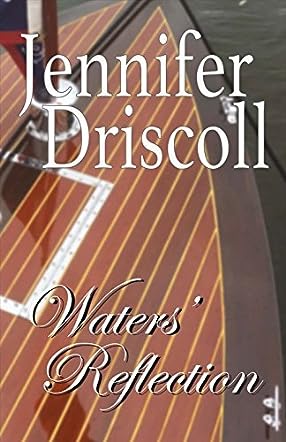 Waters’ Reflection is the first book in the Chicago Series by Jennifer Driscoll. At nine years of age, Jillian Waters’ mother, Maggie, had gone to the store alone and was never seen again. Her father, Paul, a Chicago detective, had never stopped looking for her. It was a mystery which was to remain unsolved, but Jillian dreamed about her often. Years later, Jillian works with Shannon as a barista, serving high-quality coffee to the customers of the Buzz On In café. When professional boat maker, Drew Montgomery, stumbles into the café, Jillian is taken aback by how tall and handsome the newcomer is, not realizing that Drew is just as enamored as she is. Unable to get Jillian out of his thoughts, Drew is stunned to learn from his best friend, Jay, that she also works as a part-time drummer in Jay’s band, Lake Effect, resulting in Drew becoming all the more determined to get to know the mysterious blonde beauty. With Jay playing match-maker, it is not long before Jillian and Drew are dating. Although Jillian is all grown up, her father is still extremely protective of his little girl and scrutinizes every move Drew makes. On attending a fundraising gala at Drew’s family’s country club, Jillian meets a man from Drew’s past who provides the explosive missing link in Jillian’s mother’s disappearance, shaking Jillian’s emotional foundation to the very core.

The launch of Jennifer Driscoll’s Chicago series has definitely found a strong footing with this warm-hearted romance, laced with mystery and tragedy. I very much enjoyed how each chapter was split into two, with the first half being Jillian Waters’ viewpoint and the second being in the shoes of Drew Montgomery. The in-depth behind-the-scenes look gave each character a unique depth and volume, the likes of which I have never seen. Each of the characters in Waters’ Reflection is easy to relate to and identify with. The added touch of Drew’s fun but lazy dog added a special charm which no animal lover can resist. I am very much looking forward to reading the rest of the books in the Chicago series and recommend Waters’ Reflection to readers who enjoy fun, adventure, humor and mystery in a wonderfully mysterious romance novel.