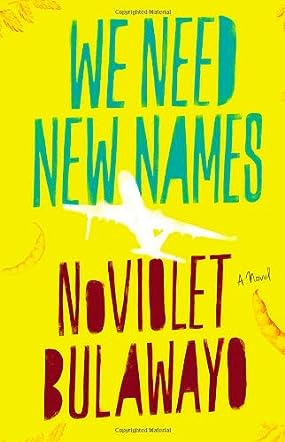 A sad and beautiful coming-of-age story of a child and her country, NoViolet Bulawayo’s novel, We Need New Names, takes us to Zimbabwe during the Mugabe era. Here, 10-year-old Darling copes with extreme poverty, hunger, and near-homelessness in her ironically-named shantytown, Paradise. We join the smart, observant Darling and her roving band of friends as they hunt for the best places to steal guavas and play frequent games of “find bin Laden.” Bulawayo’s knowledgeable and empathetic descriptions allow us to feel their hunger but also their friendships. Most of all, we see them becoming adults before their time, as in a wrenching scene where the friends try to figure out how to “get the baby out” of 11-year-old Chipo’s stomach.

Bulawayo looks unflinchingly at harsh economic, racial, family, and personal experiences in Zimbabwe, through Darling’s perceptive eyes. Later in the novel —- which reads more like a series of linked vignettes than an action-filled story -— Darling travels to America to escape the dire situation at home. However, Detroit, Michigan is hardly the answer to all of her problems. In fact, her new home brings new complications, which Bulawayo covers in chapters focused on technology, music, capitalism, violence, and pornography. These later sections feel a little forced, as though the author had a predetermined list of issues to address, though her observations are spot on. A girl who never had enough to eat is appropriately alarmed by an American culture that celebrates a combination of overeating and extreme dieting, for instance.

Lyrical at times, no reader will forget Darling’s first experience of the Michigan snow that came silently to swallow everything up with its whiteness. We Need New Names is not a speedy read. Darling takes her time expressing herself, and there is no anticipation of crisis to create momentum. Readers will, however, appreciate Bulawayo’s unique voice, her cross-cultural comparisons, and the compassion with which she portrays one girl’s international journey toward womanhood.