What A Body Remembers 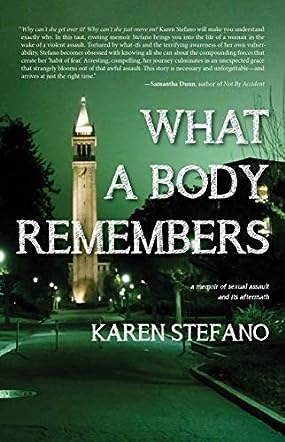 The description of What a Body Remembers by Karen Stephano states that it is “… an honest, from-the-gut account of one woman’s journey to regain her power and confidence.” That is incredibly accurate, but here’s what’s even more accurate: this memoir captures the lifelong PTSD suffered most likely by every victim of violent trauma, whether that be assault, rape or outright sexual or other abuse. I know this, not just because I have been such a victim, but because of the countless other women who have shared the same experience of being unable to “simply get over it” as they are so often advised by well-meaning friends.

We are often told that it’s not what happened to us that matters, but what we learn from it and how we deal with it as we move forward. This is certainly true, and many of us, including the hundreds who have now disclosed their “me too” stories, have managed to get on top of what happened to carve out successful lives for themselves. Karen Stefano did just that after she was assaulted at knife-point at age 19. But like the majority of us, she buried the violation deep inside, telling everyone, including her mother, that she was fine. But as she aged, again like many of us, after things started to fall apart in different areas of her personal and professional life, her carefully maintained armor began to rust as nightmares and anxieties returned. She became obsessed with wondering what became of her attacker who was acquitted. Did he go on to have a successful life? Did he continue to attack other women whose stories, like hers, weren’t believed? And did she ever get the longed-for release from the PTSD? Most victims already know the answer to that, but those who have never been victimized or traumatized in any way…lucky them…will need to read What a Body Remembers to find out.

Stephano’s style of writing is primarily narrative with a copious amount of reflection, self-analysis, and questioning of herself and others. There’s a risk that reading What a Body Remembers may trigger some victims, but other survivors will applaud the author’s ability to capture their own reflections because, believe me, despite making incredible progress in our own recoveries, not a day goes by that our own attackers don’t revisit us for a second or even a few minutes. Thought is fleeting and ever-changing, but indeed, the body remembers. Thank you, Karen Stephano, for reminding us we are not alone.