When Fred the Snake Goes to School 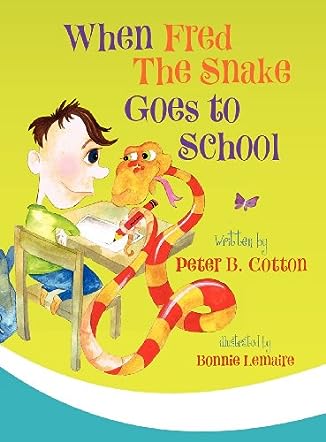 Peter Cotton, born British, is a semi-retired Professor of Medicine at the Medical University of South Carolina in Charleston, living on lovely Dewees Island, SC. He enjoys reading his books at schools and to his grandchildren.

When Fred the Snake Goes to School is a children’s animal story by Peter B. Cotton. Fred the Snake was given to James by Jungle Jim. He recently recovered from being squished in the head and was called Fred-Fred, but not anymore. James had fun playing with Fred during the summer holidays. He gets permission from the teacher to take his pet to school with him. The teacher really did not want a snake slithering around the classroom, but she had already allowed other kids to bring their pet mice, birds, and rabbits to class, so she could not deny James his request. Fred learned the alphabet and played games with the kids at lunchtime. He was so helpful and fun to be around that he was rewarded for being so cool. Now James wishes they could visit Jungle Jim and Fred’s family that he left behind.

When Fred the Snake Goes to School is such a delightful storybook for young children. Peter B. Cotton’s novella is written as a story in a poem format with rhymes that are well structured and amusing. It was originally created for the author’s children and is now read to his grandkids. The book cover is nice, but the illustrations inside are even lovelier, brightly coloured, and show the characters engaged in each activity. Fred is an adorable snake who charmed the teacher, and James is a caring pet owner. This is a great novella that teachers will enjoy reading to their students, and parents will like it too.