The Skinny on the Jinni 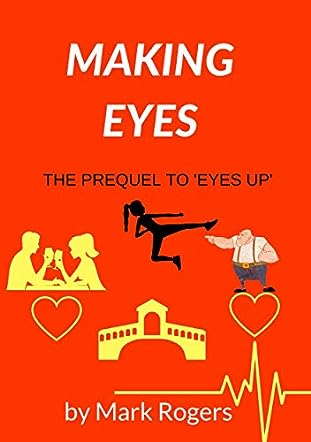 Mark Rogers is a practising domiciliary optometrist who has become a writer. His books are inspired by the iconic works of James Herriot.

"Mark Rogers" is a pen-name, and the author is at pains to point out that, while much of the book is inspired by his own experiences, the similarity ends there!

Mark has published a total of four books to date. "Eyes Up", "When Mark Met Tracy", "Comical Short Stories", and "Assorted Short Stories." (The short story books are vehicles for novelettes featuring the same protagonist, Mark Rogers, as seen in the two full-length novels.)

When Mark Met Tracy: The Prequel to Eyes Up by Mark Rogers is a romantic comedy. Mark was a rare breed, a professional that did home visits, although this was totally by choice. Mark was an optometrist who specialized in patients that were unable to visit your normal optometrist in the High Street, whether through age or physical disability. Divorced with two teenage daughters, Mark is not seriously looking for love but probably wouldn’t turn it away if it came knocking at his door. Faced with a liquidity crisis due to losing a large section of his clientele to a competitor, Mark is forced to locum at a High Street optometrist’s for a couple of weeks just to keep the cash flow in hand. Much has changed in the optometry retail field since he was last involved in it. There are advantages to working at Cosmo Specs, though, and one of those is the delectable Tracy, a colleague who clearly has designs on Mark’s freedom and more. Still, Mark’s not averse to a bit of fun, now is he? It’s what that bit of fun might also entail that concerns him the most.

When Mark Met Tracy is, as the title suggests, a frilly, fun romp through the world of thirty-something dating. I particularly liked the main character, Mark who, now having finally gotten over his wife divorcing him, is prepared to dip his toes back in the dating world again. He is ridiculously naïve and accepting which leads him into some hilarious situations at times. His character was easy to identify with, especially as a male reader. Author Mark Rogers has tapped into a pleasant reservoir of romantic situation comedy here and the plot is well-constructed, albeit predictable at times, but the writing is fulsome and eminently readable. The story pans out almost as one would expect but there is still a surprise or two thrown in there to keep a reader on his or her toes. If you like your romance light, frothy and fun, then this book will be right up your alley. There is nothing here that rises much above PG-13 so you needn’t worry about any graphic sexual situations. I would describe this more as a cuddly-type romance. Noting that this is billed as a prequel to another story, Eyes Up, the question arises – did this story pique my interest enough to want to read Eyes Up? The answer to that would definitely be a qualified yes. All in all, a satisfying read.