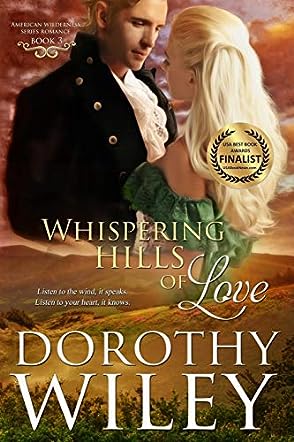 Like Wiley’s compelling heroes, who from the onset make it clear they will not fail despite the adversities they face, this author is likewise destined for success. In 2014 and 2015, her novels won five awards, notably an Amazon Breakthrough Novel Award Quarter-finalist, a Readers' Choice Gold Medal, and a Historical Novel Society Editor’s Choice. Her books continue to earn five-star ratings from readers and high praise from reviewers.

The daughter of a talented artist, Wiley inherited her father’s creativity. Raised in southern California, she attended college at The University of Texas in Austin, Texas. She graduated with honors, receiving a bachelor of journalism, and grew to dearly love both Texas and a 7th generation Texan, her husband Larry Wiley. Her husband’s courageous ancestors, early pioneers of Kentucky and Texas, provided the inspiration for her novels.

After a distinguished career in corporate marketing and public relations, she is living her dream—writing historical romances. Wiley is currently at work on a new book.

Kelly McGuffin and William Wyllie are adjusting to life in Boonesborough after the rest of the Wyllie clan has moved to their homestead sites in Whispering Hills of Love, Volume 3 of the American Wilderness Series Romance by Dorothy Wiley. Life in this Kentucky frontier town is far from peaceful as Indians still fight to claim their land, ruthless men cheat and steal from others, and natural hardships crop up unexpectedly. William is now the sheriff and Kelly works as the tutor for the children of a wealthy family until her increasingly terrifying nightmares cause her to scream and cry in her sleep, scaring the children and making the family worry about her sanity. Losing her job is a devastating blow to Kelly and William wants to help – but can he make a move for the woman he loves without scaring her? A series of incredible events demonstrate to each of them how important the other is, but the question is whether they will survive these challenges to even have a chance at a future together.

The American frontier posed tremendous challenges to the brave settlers and Dorothy Wiley’s American Wilderness Series Romance paints a realistic picture of what that life was like with heart-warming romance thrown in. Whispering Hills of Love highlights additional aspects of that life with strong characters that feel like friends. It is easy to feel their emotions as they face seemingly unbeatable challenges; you revel in their joy and gratitude when they succeed and mourn with them when they face loss. This beautiful yet dangerous country is carefully depicted, bringing you right into the scenes with the brave men and exceptional women who made their homes against all odds. This is a wonderful book, not only for its historical value, but also for its lessons regarding life, love and honor.