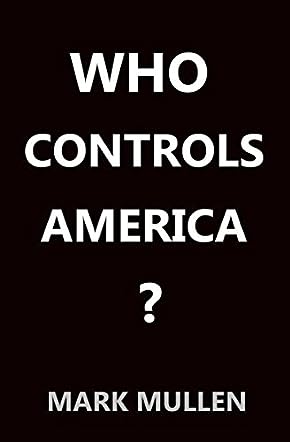 Mark Mullen’s new political essay asks the question that many Americans and people around the world consider, even silently, but one that few people have the luxury to think about: Who Controls America? In the introduction to this gripping book, the author doesn’t waste any time in citing a great authority in democracy: “Elites, not masses, govern America. In an industrial, scientific, and nuclear age, life in a democracy, just as in a totalitarian society, is shaped by a handful of men.” The idea of democracy as the “government of the people, for the people, and by the people,” seems like a huge farce in this day and age, and most recently it becomes more and more evident that the masses are manipulated by a select few, that the laws are enacted to protect the interests of a few groups rather than those of the masses.

In Who Controls America? by Mark Mullen, the reader will understand who truly holds power in American society and it isn’t the masses. The reader will understand why a handful of people can create wealth for themselves while plunging the entire nation into huge debt. This book unearths the inner game of manipulation and shows how banks and private institutions create situations that bring about economic depression, war, and poverty. American politics, the economy, educational system, and foreign policies are controlled by small groups, and these groups don’t work for the interests of the common citizens. Mark Mullen’s writing is very evocative and he uses a popular style that will appeal to a wide audience. This book gives clear answers to the many questions that are asked around the Trump conundrum, for example. It is ruthlessly honest and enlightening, the first book you should read if you want to understand political power and who wields it.