Who Was Joseph Pulitzer? 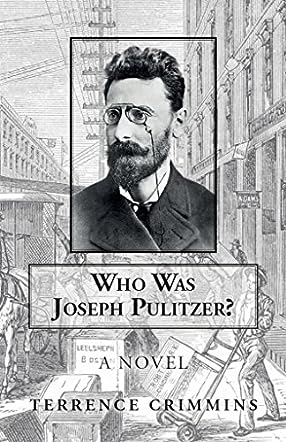 Who Was Joseph Pulitzer? by Terrence Crimmins is historical fiction, yet serves as a pretty good biography of the father of contemporary journalism as well. Mr. Crimmins lays out a nice road map and timeline that covers the great man’s ascent from a tall, skinny Jewish immigrant from Hungary, who came to the United States at a very young age to join the Union Army during the Civil War. Pulitzer wanted to join the armed forces of any country in Europe, but they would not accept him because of his weak physical condition. Imagine if the Union Army was not in need of any warm-blooded male? Joseph Pulitzer might never have been the purveyor of newspaper excellence that his name bears today. “A prisoner of his own self-will” to quote the author, Pulitzer was a classic workaholic. He took a job as a reporter on a mid-west newspaper, learning the business at a very young age and with determined confidence and a little chutzpah, he soon took over the whole operation of running a newspaper. As chief editor of The St. Louis Post-Dispatch, he reported on corruption, crime, the excesses of the rich, and human interest stories geared to the common folk. His idea was to start a newspaper for everyone, not just the rich or elite. It proved to be a very successful one. The Post-Dispatch became the biggest newspaper in the whole of Missouri. He would not stop there. With success in St. Louis, his ambitions and ego pointed him to the biggest stage for journalism; New York City.

Who Was Joseph Pulitzer? outlines the steps taken by Pulitzer to buy a rag of a paper in the Big Apple and turn it into a highly respected and universally read newspaper. This caused fierce competition with owners of other New York papers, such as Charles Dana (The Sun) and James Bennett (The Herald). Pulitzer had to deal with resentment and anti-Semitism, as well as competition from a young upstart newspaper owner by the name of William Randolph Hearst. Terrence Crimmins gives us credible, funny, and useful dialogue that colors the nuances of the major characters of the Gilded Age. It gives the reader an idea of how Pulitzer, who apparently had quite a temper, might have sounded, with some colorful profanity in his accented English. We hear from historical figures like Theodore Roosevelt, Grover Cleveland, Jay Gould, and others. This gives the reader a front-row seat in the arena of a fiery, determined, and brilliant newspaper owner and editor who ran every aspect of his business despite blindness and deteriorating health in his later years that caused him to become a virtual recluse. Yet, he still ran the paper from a distance in a soundproof room. Interestingly, he would not give by-lines to reporters, but he instituted the Pulitzer Prize to recognize these same reporters. Overall, a fun and informative read.