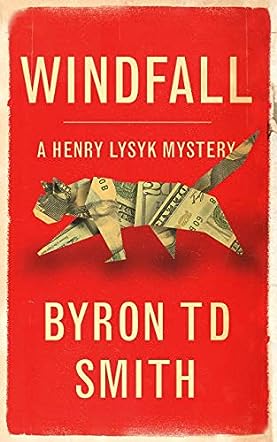 Windfall: A Henry Lysyk Mystery is a work of fiction in the mystery, thriller, and suspense sub-genres, with notable influence from the grisly world of true crime, and is part of the Henry Lysyk series. It is aimed at adults, contains some non-graphic violence and explicit language, and was penned by author Byron T. D. Smith. The book explores a hypothetical solution to a real-world case that is currently unsolved, following a washed-up accountant on the run as he attempts to flee from his old life. But this only leads him to get dragged into a dangerous journey when he and his niece begin unraveling a deadly thread of secrets.

Author Byron T. D. Smith has crafted a masterful work of mystery, drama, and criminally good writing for this exciting journey. Beyond the excellent writing quality and dynamic presentation, there are two standout strengths to the work for me. The first is in the crafting and imagination surrounding the true-crime element, which takes a really clever perspective on an unsolved case that I, as a true crime fan, knew very well, and puts in realistic thrills and spills that blur the lines between fact and fiction so well. The second, for me personally, was the presentation of Henry and Frieda, which was filled with deeper nuances than one would usually expect from this genre, and utilizes their unique powers as characters to convey key plot points through their emotional reactions and dynamic dialogue. Overall, this makes Windfall an accomplished work that will have its hooks in you from the very first chapter.

Windfall: A Henry Lysyk Mystery is written by Byron T.D. Smith. Henry believes his life isn’t going anywhere, especially with a failed marriage and a scandal that left him unemployable. He moves into an apartment, avoiding the tenants in the building. When his teenage niece Freida visits, she sees a man behaving creepily in the foyer and takes refuge with Tess, another tenant. Henry’s past makes him reluctant to socialize but he likes the tenants. The creepy intruder returns and accosts Mr. Benham and Frieda finds questionable papers belonging to the intruder. Henry, Tess, and Freida's sleuthings and leads take them to a website called Net-Tectives where amateurs investigate cold cases. They’re amazed to learn the reason why the intruder has targeted them and become extremely cautious. Yet their curiosity about the case won’t ease up.

Some of the things I loved about Windfall are the non-stop intrigue, learning more about the historic, unsolved case that I grew up hearing about, and the unique characters who are so lively and compassionate. Henry is more reserved, practical, but don’t steal his crosswords. He thinks things through before acting, unlike Freida, who is a daring and adventurous teen. Byron T.D. Smith’s writing style is warm, suspenseful, filled with charm, and is a bit poignant too. He had me speculating about the cold case and pondering who the suspects were. His Afterword was informative and the cover illustration holds significance to the case. Windfall: A Henry Lysyk Mystery makes a thrilling read.

To protect themselves from a stalker, an accountant, his niece, and an artist investigate a nearly four-decade-old hijacking crime in the suspenseful mystery, Windfall: A Henry Lysyk Mystery by Byron TD Smith. After he is fired from his bank job and his wife divorces him for one of his best friends, Henry Lysyk is trying to pull his life together. Moving into a small apartment building, Henry works in a bookshop until he can find another accounting job. His life takes an extraordinary turn and becomes even more complicated when someone starts stealing a portion of his daily newspaper. While staying with him, his niece spies a creepy man peeking into Henry's mail slot and loitering around the apartments. Soon, the residents are the victims of incidents more damaging than just a missing section of the newspaper. Who is this man and what does he want? Is there something ominous afoot?

Based on an actual historical event, Windfall: A Henry Lysyk Mystery by Byron TD Smith is a fascinating read. Although the story starts out slowly, the pace picks up momentum, building a captivating tale that leads to a smashing conclusion. Entertaining and thrilling, the plot weaves a suspenseful and intense storyline. The main characters are charming, and I especially enjoyed the precocious Frieda and her antics. Without Frieda's help, I'm not sure that the adults would have figured out the mystery! I appreciated the historical references; the author did an excellent job at portraying a fictional side of the past. I would recommend this sensational novel to everyone who enjoys a fun mystery with a side of history.