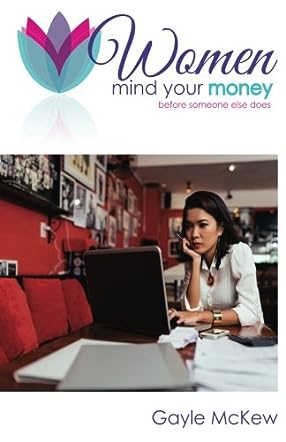 By leveraging more than 35 years of experience in financial services and almost 20 years as a financial professional, Gayle has focused on empowering and educating people about their relationship with money.

After discovering the power of the mind, Gayle understands many times a client’s mindset is what’s holding back true success in all areas of life.

Coaching is important to achieving results in all areas of life.

This knowledge saw Gayle gain qualifications in the exciting area of personal coaching to powerfully combine her passions for the mind and economic empowerment of women.

Personal empowerment of women is her passion.

There are few financial guides that are able to instill such confidence and empowerment as Gayle McKew's Women Mind Your Money: Before Someone Else Does. McKew addresses the knowledge gap between the wealthy and the middle class, the most likely cause of the egregious income disparity gap and how the latter's widespread ignorance in money management affects women the worst. More interestingly, McKew uniquely positions capitalistic materialism and spirituality, antithetical systems, as being able to coexist with one another. Before she begins discussing money management tips, McKew proposes that clearing negative mindsets towards money can allow people to regain control over their assets. With the aid of such a spiritual approach, we can perceive how operating in a 'lack' mentality can perpetuate that truth into our life, while believing that the Universe is abundant and always ready to give, will then allow more to come to us, including money. In effect, our thoughts create our reality, which isn't too far-fetched.

From the moment I began reading Gayle McKew's Women Mind Your Money: Before Someone Else Does, I felt instantly uplifted and ready, too, to finally take control of my money before someone else does. The pragmatic fiscal guidance she imparts is as valuable, if not more, as her spiritual wisdom for those in need of rectifying the grim state of their finances. Without overwhelming or intimidating the reader with complicated jargon, she explains concepts simplistically. These topics include the difference between good and bad debt, loans and leverage, financial STDs, creating passive income streams, and planning for retirement. One of the few issues that I have with the book is how well its financial advice may be translated to non-Australian citizens, such as the United States, since it appears based on the workings of the Australian economy. Nonetheless, most of the information is applicable to the economy in the United States, as well. In all, this is a must-read book for women who want to take control of their lives through their finances.

The world today is about giving more power and more control to women to manage their own lives and make their own decisions. With female empowerment and feminism trumpets sounding everywhere, one of the sounds that should be even louder is financial emancipation. After all, what is true independence if it does not come with financial freedom. In Women Mind Your Money: Before Someone Else Does, Gayle McKew aims to aid this noble cause by equipping women with practical knowledge and skill on how to manage their money better. We all need to have a solid plan concerning our financial future, and it is all in the details. Gayle shares these details so we are knowledgeable enough to avoid costly financial mistakes we are otherwise bound to make.

Women Mind Your Money: Before Someone Else Does by Gayle McKew is NOT one of those get-rich-quick books that usually ends up yielding no results. This is a well-detailed and insightful read with practical tips and tools on how to improve the way you manage your money so you are in control of your financial path. Drawing on lessons learned from both her professional and personal experiences, Gayle McKew shares practical insights on how to achieve this control. Just because you pay your bills on time does not mean that you are in control of your finances. It takes a lot more than that to be truly in control and Gayle McKew is here to show you how to be the boss of your finances. Women Mind Your Money: Before Someone Else Does is a must-read for all who desire to have a fruitful relationship with their money.

For women (and men) who want to become financially secure, consider Women Mind Your Money by Gayle McKew. From the pragmatic financial check-up in Chapter 1, through reasons for working with a financial professional in Chapter 14, Ms. McKew provides a large amount of practical information to help transform your relationship with money. What is unique about this book is that the author assists you in examining your emotional relationship with money, as well as your spiritual beliefs about abundance and wealth. The author also adds real-life vignettes to illustrate her points, adding to the credibility of her comprehensive perspective. At the end of each section, there is a Mind Your Money Tip, a quick and easy way to remember the contents of the section.

Gayle McKew’s Women Mind Your Money is both an enjoyable and yet challenging treatise to analyze and improve your financial status. The main focus is to empower women to make wise financial decisions. It is obvious Ms. McKew is knowledgeable and thoughtful in helping others to succeed. Her writing is easy to read, clear and succinct. Adding quotations, simple mathematical tables and concrete examples to the reader’s knowledge base, she teaches in ways that keep the reader engaged and curious about what new gems are coming up next. Please note the author is Australian, and there are a few suggestions that may not apply in your country. That being said, there is great value in this book, no matter where you live!

Not everyone understands their finances or the things that they should be doing with the money they earn, but finding out what you need to do is actually easier than you might think. There’s a lot out there that you can and should be paying attention to, but far too many people aren’t doing it. That’s why it’s important to pay attention to all aspects of your money and the money that you need to have as well. If you want to have a future for your family, you need that money, and that’s what Women Mind Your Money by Gayle McKew is all about.

To get your finances in shape is an extremely complex process for most people. It can be difficult to figure out how much you have and what you should be spending, and definitely where you should be spending it. This book is helpful for that process because it gives you an extremely detailed way to look at your bills and your budget (and how to create a budget), and it shows you how to break everything down. It’s also great because it gives you some tasks to do on your own and information about everything that could be related to your finances, whether it’s borrowing money, paying off loans, or even investing. I really liked that it also focuses on some negatives so you understand all sides of the process and the dangers you face when it comes to your finances. Women Mind Your Money by Gayle McKew is a great book for anyone looking to start paying attention to their finances.

Women Mind Your Money: Before Someone Else Does by Gayle McKew speaks about money and finances and gives women tips and techniques on how to improve their financial skills, debunk the myths, control their finances, and take advantage of all the opportunities that come their way. Many people manage their money very well, and many of them learn from personal mistakes and then start to reassess their decisions on finance. There is also a huge gap between what people know about money and what they can benefit from knowing. People's mindsets about money need to be improved and the gap that exists also needs to be filled properly. This book will aid readers in reducing financial stress and having a better relationship with their money.

The book is helpful in discovering money-related topics and has something to learn about money and finances for any reader. The author does an excellent job by extensively covering all aspects related to money, and the real life stories shared in the book help to highlight the information to your advantage. The book is not just a compilation of facts and figures; it gives practical tips and words of encouragement to readers. The author's suggestions and ideas are simple to grasp and can be incorporated into one's lifestyle to understand financial progress and make changes that will benefit you. The book changes all the perceptions and beliefs you may have had about money and gives more clarity on how to plan for prosperity.