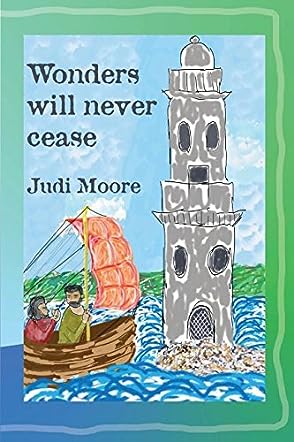 Judi Moore is a British author. She has been producing poetry, long and short fiction, and reviews of poetry, literature and music since 1997.

Between 2006 and 2013 she was a part-time lecturer in Creative Writing for the Open University, covering poetry, short fiction and life-writing.

In 2017 the Open University choir commissioned her to write the lyrics for a 20-minute piece of music for choir, brass ensemble and percussion as part of the celebrations for the year-long festival MK50.

She reviews indie fiction for ‘Big Al & Pals’ in the United States. On her own blog she reviews whatever other creative endeavours catch her eye.

When writing fiction she finds this naturally sets itself in the recent past (which itself is a pretty broad canvas), but she has a magpie’s eye and will write any story that speaks to her.

Judi was born and brought up in Cornwall, went to university in Wales and lived in Milton Keynes between 1980 and 2015. After 12 years of planning, she now lives very happily beside the seaside in Dorset, with five cats and a cat-pecked dog.

Dr Fergus Girvan is your archetypal British university professor; learned, scholarly, loves the young girls and his many bottles of good plonk. In Wonders Will Never Cease by Judi Moore, we meet Fergus, who is suffering a bit of a mid to late life crisis as he realizes his chances of finally gaining a “chair” at Ariel University may be fading. The young women he surrounds himself with have suddenly become less interesting and decidedly duller, although still wonderful for his ego and libido. His new found relationship with his high-school aged daughter is tested when he discovers that Andy has fallen in love with a middle-aged Lothario who bears no small resemblance, in both morals and motivation, to Fergus himself. Suddenly Fergus finds himself having to ally with Mary, his daughter’s mother and a woman he tries to avoid like the plague, to try to save their beloved daughter from the letch’s grasp. Throw in a supporting cast of characters that could have come out of any British sitcom and you have the makings of a funny, quirky and typically British story. Fergus bumbles his way through the situations that present themselves as he begins to realize what is actually important in his life and what he should be focusing on.

I’ve always been a big fan of good British humour, the darker the better, and Judi Moore has brought us a story in Wonders Will Never Cease that absolutely fits that mould. When I was reading the book, and especially the wonderful, bumbling, but earnest portrayal of Fergus, I couldn’t help but think of those many wonderful sitcoms produced by the British, (Black Books comes to mind here), with their self-deprecating humour and the stuffy, class-ridden characters that inhabit them. I felt Moore perfectly portrayed the sometimes senseless and rarefied, ivory-tower atmosphere that is academia the world over, but more especially so in the British system. I particularly enjoyed the age-old debate of the importance of the classics and humanities in the university system, as opposed to science and business, something that was such a hot topic in the Thatcher Britain era when this book is set. Comedy and humour is hard to write and good comedy, when discovered, should be cherished and held up for all to see. Moore clearly has her finger on the pulse of what is comedy, and this book certainly encourages me, as a reader, to seek out more of this author’s work.