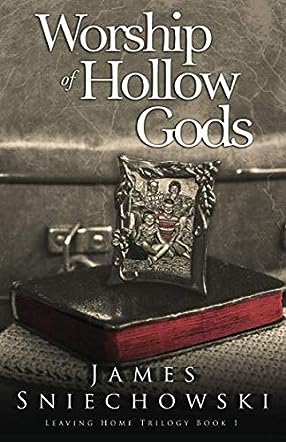 If, like me, you’re of Polish descent, with parents or grandparents who immigrated to the US, Canada or Australia after World War 2, you will most likely relate to James Sniechowski’s family in Worship of Hollow Gods. The author’s family settled in Detroit and brought into their new lives, as all immigrants do, their traditions, religious beliefs and established attitudes toward the opposite sex, along with their love of whisky. But, as a 9-year-old child, James observed that his parents “didn’t know what to do or how to be with each other, and they certainly didn’t know what to do with me, so we all lived in a vague, gauzy estrangement.”

Through rich descriptions and realistic dialogue, the author explores this estrangement, not only between his parents, but between his grandmother and the rest of the family, along with his uncles and their wives, as they meet for their weekly poker and pinochle nights. Between beers and whisky, the men played noisily at a basement table and the women played “hi-low” upstairs. James, often confused by the adult behaviours and his own growing awareness of female charms, feels invisible between wanting to please his stern father and not really knowing whether he should join the men downstairs or stay upstairs with the women. On this one traumatic night of card playing, as James tries to understand how and why his uncles and their wives are each so different from each other, he concludes that “…their practiced and honed rituals of conversation and weekly card playing gave the impression of connection. But none of them were true friends. They were family. If it hadn’t been for their blood-bond, if they’d somehow met as strangers, the likelihood of their becoming close would have been low.”

With single statements like that one (and the earlier one above), throughout the story the author continually broadens the audience for Worship of Hollow Gods. This is no longer a story only for those of Polish descent. It is for all families, regardless of race, culture and religion. There are few of us who haven’t felt invisible as a youngster in the midst of adult family members, who haven’t questioned what family love means when all members are arguing, bickering, calling each other names and hiding their real selves from each other. And for those readers who have been raised Catholic and attended schools where teacher-nuns drummed the fear of God into our minds with threats like “If God stops thinking about you for even one second, you would go out of existence,” there is an added dimension to Worship of Hollow Gods. Though it may take a while to really get into this book, take that time. You will most likely find a lot of yourself and others you love in Worship of Hollow Gods.

While I'm not Polish and have not experienced recent family immigration, I could immediately visualize and experience Jim's life and that of his family. What I loved most about this book is its astute, descriptive psychological awareness of a young boy attempting to understand and work through his conflicts with the dictates of an Old-World Polish Catholic working-class family and ambiance in Detroit to find his own place within (or without) their rigid ideas and values.

Uncle Bo's crude demand for a shot and a beer sets the opening scene for this unenlightened family's drama that compels you onward right up to its shocking climax. But even before you get there, you will have concluded, like I did, that Jim Sniechowski is a master at work giving you a literary, philosophical as well as psychological treat of a lifetime. I've read Jim's first two novels, and I can't wait to get my hands on the final installment of his trilogy.

Worship Hollow Gods is an incredible book! A gripping, vivid portrayal of the human spirit through the eyes of a boy making sense of the world. Through beautiful language, the characters stepped off the page; each person’s unconscious pain woven in with masterful craftsmanship. Sniechowski’s writing is brilliant and engaging, at times poetic and always moving, brightly illustrating the bittersweet reality of life. Stunning every step of the way.

Worship of Hollow Gods depicts the family norms, rituals, and religious routines of a Catholic, Polish, Detroit family in the 1950's. The weekly family gatherings to play poker and pinochle is the main setting yet the beautifully written images of the family personalities takes the reader below the surface to the vulnerable underbelly of their dynamics. This book became a challenge for me to examine my own family, relating to the gatherings and unspoken expectations within relationships.

I love that this book is the first of three in what Sniechowski calls the "Leaving Home Trilogy". I find it is compelling to be confronted with what that means to "leave home" when we relaize the reality of our family's faults. So, this book ends and leaves me wanting the next installment of his journey.