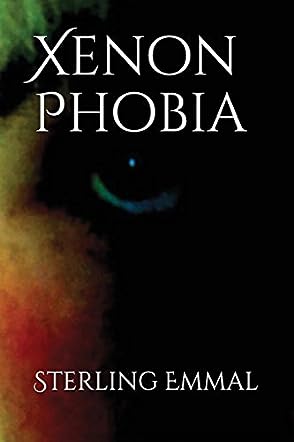 My name is Sterling Emmal. I’m a shock value author who grew up with bipolar disorder and an abusive father. My writing was always my pathway to escape reality for a few moments and enter into a plot line that I control. By reading my work you will enter the twisted catacombs of my mind, so tread with caution, embrace the darkness, and enjoy if you dare.

Xenon Phobia is a dark urban fantasy novella written by Sterling Emmal. Xenon was probably the only medical student who had braved the rigors of medical school and internship in order to take lives instead of saving them. She was coming from a very dark place in her life and had long planned exactly what she wanted to do after graduating from Stanford Medical School. Xenon wanted nothing more or less than to be an executioner for the state of California. If it had been possible, she would have preferred to be the executioner for Washington State, but that state didn’t have capital punishment on the books. Xenon wanted to be there when prisoners were killed, and she wanted to do the killing. It seemed the fair thing for her to do after her father was slain by home invaders. She still burned with hatred for those burglars, and each time she executed a prisoner, she would be feeling some bit of closure as well as giving closure to their victims. She knew she had to be very careful when she interviewed for the position. The head of the prison board at San Quentin would reject her out of hand if she revealed too much about her emotional baggage, but she was sure she could handle him.

Sterling Emmal’s dark urban fantasy novella, Xenon Phobia, is a chilling and horrific tale about a twisted and hate-filled young woman who has somehow lost all vestiges of her humanity and then loses her life just as her plans for vengeance begin to fall into place. Emmal’s lost child, Xenon, is filled with righteousness and is quite blinded to the contrariness of her positions on the sanctity of life. As I read this admittedly disturbing horror tale, I found myself wondering if the author would ever enable readers to feel any connection with Xenon, or if her righteous zeal and hatred had indeed moved her beyond compassion or redemption. This well-written and thought-provoking novella gives readers a chance to examine their own reactions and emotions, as well as their own personal quests for vengeance or retribution. Xenon Phobia is highly recommended.

Xenon Phobia by Sterling Emmal is a dark, twisted horror story about clinging to the deepest depths of your hatred, even if it means giving in to the demons surrounding you. Xenon is a doctor who managed to become the executioner for California after finding out her sister had been assaulted by her mother’s boyfriend. When Xenon is murdered by a mysterious man named Damien, she is bound by her need for vengeance. From killing the people who once loved her, to confronting a past she is just beginning to understand, she starts to slip further and further into madness, until finally only darkness remains.

I’m a future medical student, so when I read this book, I was chilled to the core. Xenon had an irrefutable sense of morality that can only be described as eerie. She carries this role on in the afterlife, all the while becoming the monster to whom she swore she’d bring justice. One of the things Emmal did incredibly well was show just how far Xenon would go to obtain her revenge. From contemplating killing her sister, to carving up her own corpse, from the moment she was revived, she had the potential to become a dark, horrific entity that solely existed to bring pain to others. Her character only served to make the end more satisfying. The fact that she took Damien’s place in the shadows, hungering for someone else to spill her hatred onto, only to fall prey to and be consumed by the same revenge was haunting. She even wrote a little message to the reader at the end, lulling her future students to her like moths to a flame.