Yes, There is a Santa 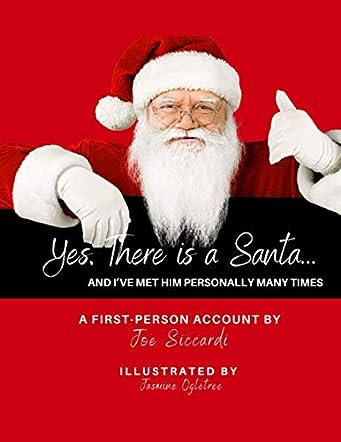 Do you believe in Santa? I know I do, for no particular reason. I’ve had my doubts over the years, as I’m sure we all have, but there was one Christmas when I’m convinced I heard the reindeers' hooves on the roof. Christmas isn’t about the fancy decorations, the gifts, the rich foods; it’s more the fantastical belief that something really, wonderfully magical can happen. And that’s Santa. Joe knows all about Santa. He believes in him. And why shouldn’t he? He’s seen Santa many times: as a child, as a teenager, and as an adult. That’s right, he’s seen the real, the one and only Santa. How did he know it was Santa? Well, for one thing, Santa knew not only Joe’s name but so many other things about Joe that no one should have known. And, Santa knew when Joe was feeling down and needed a gentle reminder as to what Christmas was all about. Santa continually explains to Joe, “the reason for the season… hope.” And he goes on, “Christmas isn’t glitter and glitz. Christmas is a feeling, an attitude. And it shouldn’t just dwell in you at Christmas. It should dwell in you each and every day of the year. Christmas is joy.”

So, sit yourselves down next to a warm hearth, among family and friends, or just on your own, and hear Joe’s stories about his visits with Santa, the real Santa. Joe Siccardi’s story, Yes, There is a Santa: And I’ve Met Him Personally Many Times, will warm your heart with all the positive reasons behind the Christmas season. Written for children, with colorful, quaint illustrations, this story speaks to the child in all of us. Beginning with Joe’s first visit with Santa as a child, this gently-told narrative leads the reader through one fascinating visit after another, as it appears Santa has singled out this one person to share his story about the real reason for Christmas. The message of hope and belief, of love and family, rings through each Santa visit, some touched with humor, each touched with compassion. By the time you’ve finished reading Joe’s story, you’ll be a firm believer. I know I am, though I was before I read his story. Why? Because, “Yes, There is a Santa”. Beautiful story, one to cherish year after year and all year long.