You Got to Me 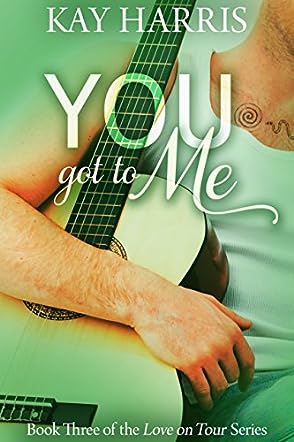 Kay Harris is a college professor, former park ranger, and anthropologist. People observation is in her blood. She writes romance novels that emphasize character development and dialogue. They always contain a little bit of sweet, a dash of sexy, a touch of heartbreak, and a whole lot of fun! Kay grew up in Michigan, has since lived all over the west, including Montana, Wyoming, Utah, Arizona, Nevada and California.

You Got To Me is the third book in the Love on Tour series by Kay Harris. Lisa Roberts is still getting used to the fact that her park ranger sister, Baby, has married a rock star. With Lisa having a crush on her sister’s husband, Sean, she is put into a precarious situation when Baby asks Lisa to accompany Sean on his next rock tour, as Baby needs to stay at home with her newborn, Henry, named after Sean’s best friend and touring partner. When the paparazzi question the paternity of Sean and Baby’s child due to adult Henry’s close relationship with the couple, Sean’s older brother, Sam, steps up and agrees to take a blood test to prove baby Henry’s paternity. Lisa doesn’t think much of Sam and rejects all of his sexual advances, especially since he had tried to blackmail her into going on a date with him. Sam is the last person in the world that Lisa would ever get involved with. But after they are trapped in a locked stairwell together and Lisa’s claustrophobia goes into overdrive, she hooks up with Sam on the spur of the moment, hoping to distract herself until they are rescued. Suddenly, Lisa’s attentions have shifted from Sean to Sam, and she is determined not to act on her attraction towards him, but a sudden curve-ball throws her into his arms. Now Lisa needs to decide whether the nightmare of the paparazzi and the constant touring is a future she wants to have, especially since the media watch her sister’s every single move.

I definitely have to take my hat off to Kay Harris. Lisa’s journey and struggle with love is difficult, humorous and filled with adventure and surprises. Seeing first-hand what her sister goes through with the media, the fans and the ex-girlfriends of the band, the reality of what Lisa had once thought of as the perfect life ends up swaying her from wanting the same for herself. Sam’s desperation in trying to have a date with Lisa initially ends disastrously, as he had tried to blackmail her - which immediately led her to think that he was not only underhanded and conniving, but also not serious about any sort of relationship. I liked that Lisa saw a lot of Sean’s physical traits within Sam, yet could easily set Sean and Sam apart by the way they treat women. Fame most definitely has its downside and Lisa witnessed Sean, Baby and Henry all being hammered in the media, with sensational stories being printed to try to break up a happy home. Seeing Sam step up and face his own fears in order to get his brother out of the tabloid nonsense that had arisen showed him to be a true champion, protecting those he loves with everything he has. I very much enjoyed You Got To Me and cannot wait to read the fourth book in the Love on Tour Series, which will appeal to all those who enjoy a great comedy-romance tinged with realism and drama, allowing the reader to see how the other half lives.