by Norman B Schwartz 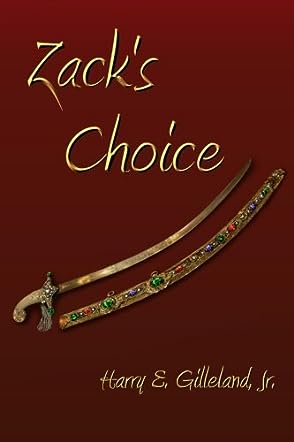 Following three years of service in the U.S. Army as a captain, including a tour of duty in Vietnam, he returned to earn a Ph.D. in Microbiology from UGA in 1973. A two-year postdoctoral fellowship at the University of Western Ontario in London, Canada followed.

In July of 1975, Harry joined the faculty of the Department of Microbiology and Immunology at Louisiana State University Health Sciences Center in Shreveport, Louisiana. After twenty-nine years of teaching microbiology to medical and graduate students and performing vaccine research, Harry retired in July of 2004.

Today Harry and his wonderful wife Linda live in Shreveport, where Harry engages in his passion for writing full-time.

Zack's Choice is an adventure story written by Harry E. Gilleland, Jr. Zack is having a last adventure before going back to Yale for his final year of pre-law studies. His life is planned and set out: a law degree from Harvard and then a career with his mother's law firm. He's been touring the Southern states on his Harley on his way home to Portland. While Zack's parents were not at all enthusiastic about this trip, Zack stood his ground and has been having a great time. Everything changes when he stops to pick up a young hitchhiker in the deserts of New Mexico. The hitchhiker, Bobby, seems aimless and too young to be on his own, so Zack treats him to dinner and shares his motel with him. When Zack wakes up, Bobby is gone, along with Zack's wallet. Zack calls home for extra cash and continues on his trip, stopping in Las Vegas for a show and some gaming before going home. He's surprised to find Bobby walking down the street and, on apprehending him, hears a very strange story indeed.

Harry E. Gilleland's contemporary fiction novel, Zack's Choice, is a first-rate adventure tale. The plot is fast-paced and very entertaining. Zack is a good boy when the reader first meets him, whose big act of rebellion from somewhat domineering parents is a summer trip on his Harley. He's already resigned to it being his last big thrill when life interrupts. Bobby's story is so crazy, yet compelling, that I was taken in as well and began to think Zack's Choice was another fiction genre altogether. There's a lot of humor as Zack blithely goes off to school, not fully realizing what he's done, and a grim peek into the legal machinery the unwary can get enmeshed in. Zack's Choice is literate, fun, and entirely unpredictable, and I enjoyed it immensely.