Cheetah on the Wing 1 Don't Tell Me You Love Me 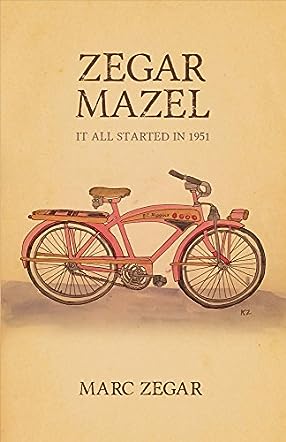 Zegar Mazel: It All Started in 1951 is a collection of autobiographical adventure stories for children written by Marc Zegar. Zegar was in his forties when he finally started his family, and, due to his personal circumstances, he had to raise them without their experiencing other family members besides their mom and dad. Each night, he would tell them a story based on his life growing up on the East Coast during the 1950s. His mom worked the farmers’ market as a presenter, and Marc was usually absent from school on Fridays because of that fact. Marc loved the hustle and bustle of the Amish farmers' market and still wonders about the lovely girl who sold the pretzels her father and brother would make. His most memorable farmers' market experiences, however, were to be found on Staten Island where a driving range became both a learning and enterprising experience, and the neighboring airfield where an elderly man took him up for a flight in his private plane. Mom’s business also took them to Atlantic City and the famous Boardwalk, where Marc marvelled at the diving horses and Mr. Peanut, dressed in top-hat and tails. A lot can happen in 10 years, and it had been a while back for him as Zegar recounted these tales for his kids, but he enjoyed reminiscing and sharing those moments with them. This book was a natural outgrowth of those evening tales.

Marc Zegar’s collection of autobiographical adventure stories for children, Zegar Mazel: It All Started in 1951, is a sheer joy to read and an often hilarious look at the things kids can get into, no matter what the situation. I love this book! I was grinning like a fool while reading it except for those times I was laughing out loud. Zegar brings his childhood adventures into glowing Technicolor, and each one was glorious. My favorites? Well, there were quite a few, but Halloween on the Ridge, No Tonka Toy and Bombs Away would definitely rank up there. The Strongest Man in the World, and the ensuing stories that deal with race and racial inequality, are powerful and unforgettable. Having grown up at approximately the same time as Marc, I felt a kinship of sorts reading his stories. I instinctively knew when he had trouble not laughing a bit as he shared some of these stories, and could feel the magic that was Halloween throughout the narration of that masterful tale. I remember those amazing popcorn balls his grandmother so painstakingly made, and enjoying the other homemade goodies that neighborhood grannies and moms would make. Halloween was indeed magical back then. If you were there, you’ll love reminiscing with Marc; if you weren’t, live it vicariously through his marvelous stories. Zegar Mazel: It All Started in 1951 is most highly recommended.

What a wonderful walk down Memory Lane I had reading Zegar Mazel. Each of the 27 short stories had emotion, character and a loving family theme. New Jersey, Staten Island and New York were presented in a realistic first person narrative. Marc Zegar was the kid on the block who was everyone’s friend and that everyone could relate to. He had his ups and downs and his good times and bad as he went about his everyday life, enjoying being a kid. Marc shared his early friendships, crushes, adventures and misadventures that brought you right onto the pages and into the stories. I went along to the Farmer’s Market, Atlantic City, road trips in the country and more with Marc, his brother, Yiddish grandma and parents. Each one of the stories told a different memory and each one of the stories made me smile, laugh out loud or feel really bad.

I cannot say enough good things about Zegar Mazel. I was lucky enough to share in many of the memories of the 1950s as I grew up living in the same New York area that Marc talked about, sharing some of the same memories, my favorite being when he reminded me of the delicious Pistachio Mint ice cream cone from Howard Johnson's. I do think, however, that anyone can enjoy Zegar Mazel because it is the story of a boy growing up, his thoughts, his hopes, his ambitions and his innocence, and it is so very well told. I believe all readers will really enjoy Zegar Mazel a lot. It is a five star winner.

Zegar Mazel: It All Started in 1951 is a memoir detailing author Marc Zegar’s childhood in the '50s. Marc’s adventures begin in a house in Ridge Road and a schoolroom in an old church. Weekends take him to busy Farmer’s Markets where he befriends an airplane pilot, the beautiful Amish girl who runs her father’s pretzel stall, and the huge, muscular man who builds forts from the potatoes he sells for his employer. When at home, there are days spent making treats for Halloween, riding his bicycle with the girl from the rundown house on the corner, and the discovery of the largest peach in the world. Marc’s gregarious nature and enterprising attitude carry him into all sorts of escapades.

Zegar Mazel is a delightful, nostalgic reminiscence of a childhood filled with amazing exploits. Each chapter has a self-contained snippet of childhood. While details from one story may flow into the next, Zegar Mazel is more like a collection of short stories than a novel. There is a haunting nostalgia surrounding some stories while others are so far removed from the normality of modern life that they seem quite whimsical in comparison. Zegar touches on issues concerning racism in the era, but presents them from the point of view of a child untainted by prejudice. While the author states that Zegar Mazel is not intended as a social commentary on racism, there is no doubt that the treatment of this topic is effective. I see so much of my own son in Zegar’s childhood memoir and can’t help but mourn the fact that the world has become a place where such freedoms are no longer possible.

In Zegar Mazel by Marc Zegar, we take a step back in time to 1956, when the world seemed innocent and communities were tightly knit with a common purpose. We experience what life was like through the eyes of a 5-year-old boy and follow his experiences and adventures with his friends and family. Children were free to run and play in the nearby woods and rivers; their imagination was their playground and people needed nothing more than the stability of work and love of friends. Talking to strangers was not a problem, and neither was the long walk into town or to school. Parents would let their children grow and use their own judgement most of the time as to what was safe and what wasn’t. This is a story of innocence and new experiences. It will take you back to a time when a child could be a child.

Although I grew up in the seventies, a lot of the experiences in this charming book resounded with me. The descriptive way the author has written this book brings that era to life. The dialogue between the children was realistic and humorous. Each character was very well created and I especially loved Amos. This novel gives everyone a chance to relive their childhood and the adventures and games they used to play. The outdoors was the place children could run free with no dangers as there are today. People could also speak freely, communities were supported by one another. I enjoyed the chapter when Zegar meets the little Amish girl, Sarah, and the feelings he had for her, and also his fear as he travels to New York. An excellent subject of childhood innocence that will take you back in time. A perfect book to snuggle with in an armchair and escape the reality of today. I would recommend this book to old and young readers alike.