In the Marble Maze The Girl I Never Knew 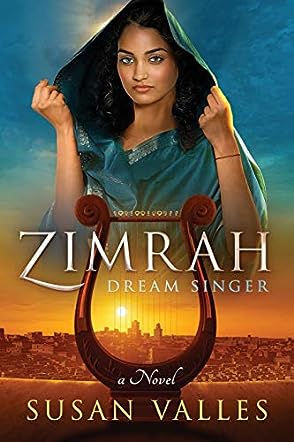 For the past twelve years Susan Valles has been using her gifts to lead others into the presence of God through worship. Touched by this presence in a profound way at the age of ten, Susan developed a deep hunger to help others experience the love of God and the majesty of His presence. Writing, singing, playing the guitar and songwriting became extensions of this hunger, an outlet for the passion Holy Spirit was stirring inside her to bring the lost and hurting into the healing embrace of the loving Father.

“For God speaks again and again, though people do not recognize it. He speaks in dreams, in visions of the night, when deep sleep falls on people as they lie on their beds.” Job 33:14-15

This has been Susan’s experience. Abba Father speaks to her in dreams and visions, giving her inspiration for creativity. Many of her songs have been written in this way, and this is how the idea for her latest project, Zimrah, Dream Singer began. This novel, a culmination Susan’s personal experience in her relationship with God, as well as a few of the songs (He continues to give), was the next step in a faith walk that began with her first album Small Beginnings, and continued with On My Way. The Lord put her on a path of obedience and simply learning to trust and follow has brought her great joy.

Susan’s prayer for this continuing journey, as she writes the second (Zimrah, Dream Walker) and third book of the Zimrah series in that many more will understand the true intimacy that comes with the knowledge of the Living God. Her desire is that through these books and songs many will know God and His benefits, that freedom from fear, and other strongholds is the result of living as citizens in the Kingdom of God.

In Israel, before the miracles of Jesus touched many lives, there lived a servant girl, a slave, really. Her name was Zimrah. She was bought by her master, Jesse, when she was only a few days old. No one thought she'd live, but she did and, as she grew up in Jesse's household, she proved her strength of character and her ability to overcome the evil tormentors that haunted her dreams, overcoming them through the power of music and the gift of a lyre which was shown her by Yahweh, the one true God.

Music brings Zimrah joy and banishes the evil that lurks all around. Singing the Songs of King David (the Psalms), Zimrah is like King David as she lets the music fill her heart as well as the hearts of those around her who can hear her singing. She learns to recognize the voice of her real Abba (Father) in heaven and to believe Him when He tells her to rest, sing, read and write. For, yes, unusual as it is for a slave girl, Zimrah can do all of those things and she does them very well.

Zimrah’s music brings joy to others as well, particularly her master, Jesse, who struggles with his own demons. Zimrah's music also brings joy to the young Roman soldier and captures his heart. Music becomes the bridge that connects, the power that brings her faith and her beliefs to the community around her, the community that had so often shunned her as she was growing up. As she and her master, Jesse, read together the stories of Moses and Job, they both learn how to stand up against their tormentors, the demons of their dreams, and how to stand firm in their faith, and they share their stories and their faith with everyone around them, particularly Zimrah’s Roman soldier.

Susan Valles has written a very inspirational story about a young girl in the early part of the first century. Zimrah Dream Singer portrays the power of music, a gift from the one true God. The story is told by Zimrah, from her perspective, and it is as if the reader is sitting beside her listening to her tell her story. Zimrah tells her story in the beautiful form of ancient storytelling, like the prophets once told their stories for centuries before. As she tells her story, gently, quietly, soothingly, we, the readers, can only sit and listen, learn and rest, content in the faith of our Creator. A charmingly lovely story; a powerful story with a powerful message, a message about faith, belief, and the courage to face the demons that try to block the path to the one true God.

This book has been so very precious to me. I have read it very slowly, absorbing each and every word, not wanting to finish the book before the next one comes out! However, it's gripping and hard to put down, so I shall read it again and again until the next one is out...and so on...

This book will bless you and your relationship with our Heavenly Father. It is one you will want to share with your mothers, your sisters, your daughters and your girlfriends!