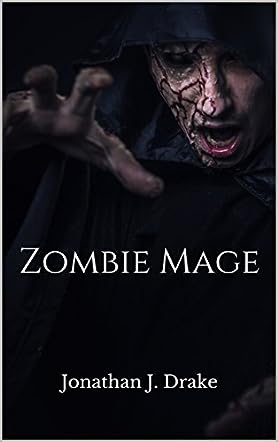 I remember once being told that we're just like plants. We eventually wither and die whereupon we basically feed the earth and maggots with our juicy remains. Nice, eh? Something to look forward to then!

I was also duly informed that there's nothing special about us, we don't come back and there's certainly no afterlife in any form.

This was certainly an interesting perspective on death; I suppose the person I was speaking to had no religious (or spiritual) beliefs and therefore deemed death to be one final kick in the groin before the earth and its elements consumed him.

On that note, I mulled over these words with much interest and decided that, ultimately, there must be more to it. Something deep inside of me certainly didn't agree with that rather blinkered opinion of a desolate death.

In fact, this whole debate over death inspired me to write Zombie Mage. Death is certainly something that is unavoidable and definitely not desirable although to some degree this probably also depends on how you die.

But, rather than worry about this eventuality, is it best not to think of it as an exciting, new adventure into the unknown? Or, if that sounds overly positive and verging on the ridiculous, how about, at the very least, accepting death, being mindful of it and certainly not despairing over it?

For Olligh Selthnik, death has a whole new meaning and certainly isn't how he imagined it. Who knows where it will take us...

Readers will find a hidden gem, oddly enough, in Jonathan J. Drake's Zombie Mage. There is a dark and chilling tale within the fantastical plot, but it isn't as grotesque as one might expect from a novel that includes zombies. Olligh Selthnik awakens in a world that is no longer his own. He seems to have lost most of his memory, though he does recall his name. He's viewed as a zombie, but he's convinced he is not such a monster. Upon finding a way to speak once again, he is able to begin asking questions as he searches for answers to his dilemma. Unfortunately, most people he encounters are deathly afraid of him. He has better luck conversing with others who are dead, but that is a challenge for Olligh as well because he doesn't believe it's possible that he is dead, too. The truth is possibly far more disturbing...from the beginning of Zombie Mage to the very last line.

Jonathan J. Drake has crafted a very well-written tale of horror, with a touch of humor, fantasy and magic in Zombie Mage. The cover doesn't do the story justice and, sadly, potential readers do still judge books by their covers. But, if readers move past the barrier of a so-so cover, they will find a unique perspective on the traditional zombie horror novel. In fact, Drake's use of magic in the story steps far away from the modern tales of magic and the fear magic evokes in those who don't understand it or use it. Zombie Mage has just enough creep factor and gore to keep horror fans interested, while Drake brings in a deeper plot surrounded in fantasy and mystery. Jonathan J. Drake's Zombie Mage is not one to be missed!

Olligh Selthnik wakes up, only to find himself in a pit with corpses and body parts all around him in Zombie Mage by Jonathan J. Drake. As if that’s not bad enough, two men come along and want to put him out of his misery. Before that can happen, though, he realizes that his body is decrepit and his mouth is sewn shut and he disappears in a swirl of green mist. Olligh then finds himself straddling a female corpse in a stone-walled room. Olligh manages to escape from this room and tries to go to town, but his memory just doesn’t want to cooperate. In his undead condition, everyone tries to kill him and, each time, Olligh is transported to another place in the green mist. After a while, he encounters the Dark Cloaks, the leader of which, Sebastian Denlik, proposes a way for Olligh to be reunited with his undead wife and succumb to a ‘normal’ death. All Olligh has to do is bring back five more undead people to Denlik and the cult that worships Chektri, the lord of death. The search takes Olligh to supermarkets, circuses and forts in strange worlds, even back to his home where he finds one of his old tomes about the magic of the cosmos. Will Olligh’s adventures bring him what he wants, or are there secrets left to uncover about what is really going on?

Zombie Mage certainly takes you on a creative, demented adventure that is surprisingly full of dark humor as well as horror. Jonathan Drake’s second novel centers on a unique character which, if you can’t like him, at least you can sympathize with him. For the first 50 pages, you follow Olligh around with no idea what the point of the story is – just as Olligh has no clue where he is or what he is doing. Getting past that point, though, the plot becomes clear and the action does any great saga justice. The characters are wonderful, and their interactions really interesting - both the good and bad. Each character offers plenty of their own surprises and personalities, and the outcome is certainly not what you may have come to expect! You simply have to read it and find out what madness is lurking behind the strings pulling Olligh through his adventure!

A story that starts with a man waking up beside a corpse, flies buzzing around his nose, creates a keen interest and the reader immediately wants to know what happens next. Zombie Mage by Jonathan J. Drake is a delightful read for fans of horror stories with creepy characters and creatures. Olligh Selthnik wakes up beside a corpse, feeling weird, barely able to remember his own name. He couldn’t remember much, and now he has to live in a decaying body. Can he find answers to questions that plague his mind? This is a beautifully crafted story, loaded with grim humor and a setting that reveals great sights and disturbing scenes. Right from the start, the reader wants to know more about the protagonist and the transformation that has brought him to the point he is when they first meet him.

Jonathan J. Drake is a great storyteller and it isn’t an overstatement to say that he has a gift for prose and character. His writing seems to contain a spell that keeps readers’ eyes riveted on the pages, even when the scenes described are hurting the senses. The story is well-plotted and, at every moment, the reader has the feeling that something could happen any time soon. This is not usually my genre of choice, but the author has succeeded in making me care about his characters. Zombie Mage stands out in its originality and its entertainment, a gripping story that will transport readers into a reality that feels strangely familiar, thanks to the riveting nature of the narrative and the author’s compelling voice.