An Island of Light 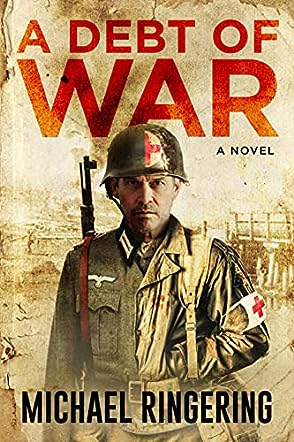 When he was in the third grade at East Alton Elementary School, East Alton, IL, Michael Ringering selected Miriam E. Mason’s Broomtail for a class-assigned book report, and from that moment on, set his sights on wanting to write fictional novels and short stories.
He published his first novel, Six Bits, in December 2012, earning finalist designation in the 2012 USA Best Book Awards for Fiction. Since then, he has published four short stories: Willy the Whale (2017), A Face on a Train (2017), A Calico Tale (2018), and The 9:15 to Grand Central (2019). Michael’s second novel, A Debt of War, was released on Sept. 13, 2021 is available now on Amazon in both eBook and paperback formats. A hardcover version will be released later in the year. In December 2017, he started his third novel, based on a childhood memory, and continues to work on several short stories.
Michael was born in Alton, IL, and raised in nearby East Alton, where he graduated from East Alton-Wood River High School in 1984. He is a 1989 graduate of Murray State University, earning a bachelor’s degree in business administration. Following a 14-year career working in media relations and communications in Major League Baseball, he entered the healthcare industry where he serves as a specialty practice administrator.

Michael resides in Southern Illinois with his fiancée Jackie. They have a dog, Victoria, three goats, Macey, Abby, and Annie, two horses, Lilly and Sophie, and a slew of chickens.

A Debt of War by Michael Ringering is a World War II novel quite unlike any war book I have ever read. When Paul Bacca and his siblings attend their mother’s funeral in 2009, Paul is shocked and surprised to be approached by an elderly veteran in uniform who hands him a special gift from Paul’s mother, an unpublished novel about World War II written by a previously acclaimed poet. As an editor of a publishing company, Paul is well aware that this poet has never put forward a novel for consideration and is duly excited to read it but also confused about how it found its way into his late mother’s possession. Sitting down to read that evening, Paul is soon transported to the battlefields of Europe in the final months of the European theater of war, where the most intriguing and surprising of friendships was to develop between a German soldier, branded a traitor, and a young farmer boy from Pennsylvania. What ensues on those bloody fields so far from home will astound Paul and excite him for the possibilities for publication of this amazing manuscript. Paul is transported to the most unlikely alliances between a group of American GIs and their unexpected German comrade. When debts of honor are earned in wartime, the extent to which soldiers will go to fulfill the obligations of those debts tests the bonds of friendship, patriotism, bravery, and, at times, even credibility.

I’ve read several war books of one stripe or another recently, but I can honestly say that none has touched me to the very core of my being as A Debt of War did. Author Michael Ringering has somehow taken an almost impossible scenario to behold and shaped it into a believable and powerful narrative. The story is utterly compelling, and the characters jump off the page and attach themselves to the reader’s psyche. For the poor German soldier Jakob, tormented by his love for his family and yet torn apart by his father’s blind fanaticism to Hitler and the Nazi rhetoric, the war was an absolute struggle for someone who could only be described as a gentle soul. The correlation in nature and beliefs between Jakob and GI O’Dell was startling and powerful.

The story is full of action, excitement, and battles, which will keep all the adrenaline junkies extremely happy. Yet, it is beautifully blended with deep and powerful emotions that will pull at any reader’s heartstrings. Like Paul, while reading this story, I began to question if this was fiction or reality. The setting, the background, the equipment, everything about this story rang true, and one was almost left hoping, in some way, there was a grain of truth to this absorbing story. I doubt I’ve been this impressed with any author’s work the first time I’ve read them, and I will definitely be seeking out more of his portfolio. If this story is anything to go by, he is an original-thinking author with wonderful narrative ability. I loved this book, and I can highly recommend it.

A Debt of War is a work of fiction in the historical genre. It is aimed at adult readers and was penned by Michael Ringering. The book follows publisher Paul Bacca as he is approached by a strange veteran at his mother’s funeral. Presented with an unpublished manuscript that his mother wished him to have, reading the manuscript and researching the truth of it reveals a family secret that shakes the foundations of Paul’s life as he learns about an impossible friendship between two enemies who found themselves in debt to each other, a debt that would put them in each other’s lives forever.

War is, by its very nature, an inhumane beast. Real people with dreams and aspirations are placed in uniform and fed into a hellish world where they quickly become anonymous statistics in a report and later in a history book. It’s an injustice to those who died that they did so only to become a footnote in a textbook, but it is an injustice that Michael Ringering seeks to put right with this book. Exploring how even bitter enemies out to kill each other can find humanity between them, this book is a reminder that wars are fought by real people, each with vivid and complex lives and feelings. A Debt of War does not blink as it examines the extreme ways that conflict molds the people forced to live through it. As such, I recommend it highly to those interested in military fiction that focuses less on the glory of conflict and more on its humanity.

As the family is leaving the burial service, a mysterious man in a military uniform decorated with the story of war and service is seen at the fresh grave of Paul Bacca’s mother. He is holding a crudely wrapped package. Later the man arrives at the family home, explaining that he had known Paul's mother for many years. The package he held is a manuscript, a novel written by an acclaimed poet. It was Paul’s mother’s dying wish that it be delivered to the family. Paul is a publisher and is skeptical that such a well-known poet had authored a novel and not published it. But he agrees to read it … and the story within a story begins. Puzzled by the very detailed and poignant story he has read, Paul confronts the stranger and learns secrets of his family’s history revealed in the novel, the truth of friendships and lives entwined in mutual debts owed among enemies. The stranger’s revelations of the truths hidden in the manuscript change Paul’s life and the lives of his siblings forever.

Michael Ringering has created a masterly work in his novel, Debt of War. In a story within a story, Ringering blends the mystery of an unpublished manuscript, which puzzles the family of Paul Bacca with its curious delivery and its contents, with the deeply emotional personal soldiers’ experiences of the horrors of combat, the gut-wrenching experiences of the victims of war, and the mirror image experiences of the enemies – all victims of their circumstances. I repeat the word 'experiences' because it is the core of the emotions, reactions, and the entwined, all-enveloping love that reading Debt of War engenders. The rough and tumble interactions of soldiers in deadly combat with its “foxhole humor” and incidents twist the lives and fortunes of captors and prisoners into mutual struggles to survive, some successful, others tragically not successful. Herein grows the debt of war among the soldiers. The mysterious manuscript is explained, and its true author revealed in a conclusion that rivals the tales of William Sydney Porter, better known by his pen name O. Henry. The comparison is not offered lightly as Michael Ringering has earned it fair and square with this brilliant, compelling tale of the entanglements of life and death – and the debts to be paid.