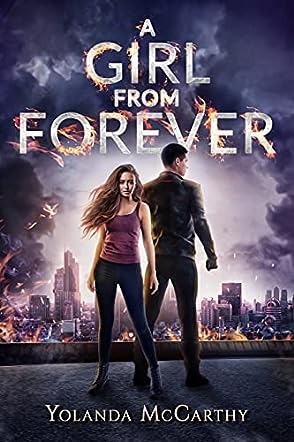 I grew up in London and now live on its edge, in a village where the sprawl of the city turns into lavender fields and lakes. I live with my husband, son, two suspicious cats and some very ungrateful fish. A Girl From Forever is my first published novel.
I write because I’ve tried very hard to quit, but I don’t seem to be able to.
Sometimes I climb mountains.
Always I daydream.

Do you know who you are? Do you know where you belong? Do you recognize good from evil? Seventeen-year-old Fern thought she understood it all. She believed she had been created in a petri dish, made immortal, and brought up in the Forever Institute with other seventeen-year-olds who were created the same way. Then, it all comes crashing down, when someone from outside the Institute telepathically reaches into her mind and lures her out of her safety net home. Kidnapped, frightened, unsure who to trust, Fern hears one story after another, not sure which story to believe. Are her captors right? Was the Forever Institute, the only home she ever knew, really a cult, a dangerous institution that defied all laws of humanity and threatened the world beyond? Or are the lessons she learned growing up the ultimate truth and all that she witnesses beyond the Institute’s walls a lie?

Yolanda McCarthy’s dystopian novel, A Girl From Forever, is a thrilling teen adventure that explores multiple what-if scenarios as a young woman follows a lengthy quest for answers. Told in the first-person narrative from Fern’s point of view, the reader will be instantly caught up in the turmoil that plagues the protagonist as she seeks answers. With considerable conflict, both physically and mentally, the plot moves forward with a driving force that will have the reader unable to put the book down. The dialogue is realistic and helps develop the characters and keep the story flowing quickly and effectively. The protagonist struggles with her evolving, and often conflicting, feelings for her captors as well as all those she meets along her journey. This is a powerful story that not only rivets the reader but speaks to them about issues all young people face: first love, betrayal, truth, and denial, and what’s really real is this complicated world in which we live.