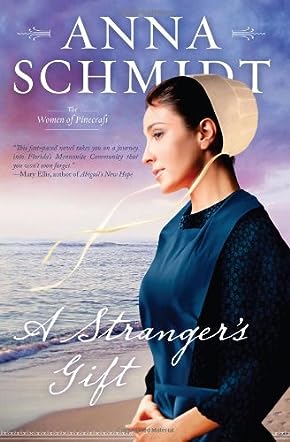 A Stranger's Gift by Anna Schmidt is a novel about two different individuals: Hester Detlef, a Mennonite woman and John Hafner, a shunned Amish man. Hester, the daughter of a Mennonite minister, is a registered nurse and head of the Mennonite Disaster Service. That she is well past the age of what one figures a woman should be married does not bother Hester. She enjoys what she does, and if the right man comes along, then so be it. John, leaving the Amish way in Ohio, moved to Florida, bought his own place and will show that he can live a solitary and self sufficient life...that is, until two storms race into his life: the category 4 hurricane named Hester and a Mennonite woman named Hester, who seemed like the hurricane herself. Ignoring her pleas for him to leave, John not only loses almost all he has but also sustains injuries. As Hester keeps intruding into his life, will John restore his faith not only in his religion but once again in people and especially this stranger called Hester? With both of them feeling guilty over a past, can they let go and find a future?

This is the first book in the author's Women of Pinecraft Series and a very good start. I found the novel to be very well written. The author portrayed the characters as normal people, and not perfect. They had their faults, jealousy, egos and more, but they worked to overcome them instead of shrugging them off. As I read, I found the characters were very easy to become involved with and felt like I was right there in the midst of the cleanup after the hurricane, as they all worked together to help each other get back into their homes. There was no one who was any different regarding race or religion, rich or poor, fancy home or homeless that did not work together to help each other. That’s the way it should be after any disaster. I feel this is a great start to a wonderful series that takes place in Pinecraft, Florida. It's a wonderful Christian novel with a very enlightened message,” Love your neighbor as yourself,” and I highly recommend it.