Spirit of Your Soul 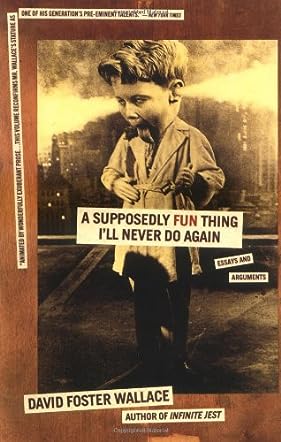 From a midwestern state fair, a Celebrity Caribbean Cruise, the effect of TV on the masses, pop culture, tennis, math, and pop culture, to an analysis of David Lynch films, this collection of essays by David Foster Wallace runs the gamut. The seven pieces in this 1998 collection, "A Supposedly Fun Thing I'll Never Do Again," were originally commissioned for national publications including Harper’s Monthly. The essays including the more famous and hilarious 'A Supposedly Fun Thing I’ll Never Do Again', penned aboard a luxury cruise ship, are thought-provoking and challenging, insightful, articulate, witty, ironic, and at times simply brilliant. This collection of essays by David Foster Wallace is also a reminder of American pre-recession, pre-911/ Home Security culture, before the heyday of reality television, smart phones and social networking. The footnotes compete with the text in value and are worthy of perusal on their own.

With keen observations and a true genius for language, Wallace offers a most unique perspective on every subject he addresses, and does so with exhaustive determination. This collection is not a light read; each essay could also be approached within its cultural and historical context and appreciated from an academic point of view. In this audio version of "A Supposedly Fun Thing I'll Never Do Again," the excellent narration by Paul Garcia complements the text, creating vivid visual images for the listener.