Adventures in the Bush 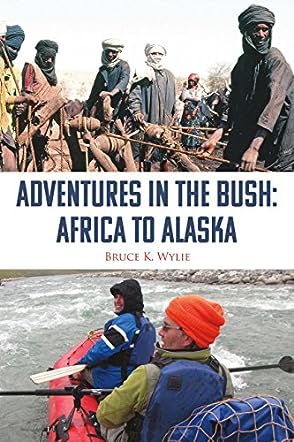 I wanted my grandchildren and my children to know what an adventurous live I have led. I grew up in rural settings in the western U.S. I fought fires for the Forest Service, went to Niger, Africa in the Peace Corps (and stayed there a cumulative 10 years working on various Range Management projects), collected data on bison ranges in the Great Plains, and did field work in remote parts of China, Mongolia, and Kazakhstan. The last focus was field work in Alaska on permafrost. When things go wrong working in remote places, I (and folks I worked with) came up with creative solutions to potential dire situations. This book is a collections of short stories (nonfiction fire side stories) in a casual, easy to read style.

Adventures in the Bush: Africa to Alaska is a collection of nonfiction adventure memoirs written by Bruce K. Wylie. Wylie’s early love of the outdoors and adventure was honed by episodes of Roy Rogers and The Lone Ranger when he was small. He yearned to be out on the range, riding on his own trusty horse. His early entreaties for a horse didn’t get much traction at first, but his father did, in fact, find a horse and colt for Wylie to care for over several winters. It was a marvelous learning experience which led to him learning how to humanely break and train horses. As he rode, he discovered myriad trails near their home and developed an appreciation for adventure and nature that would determine his choice of college and major. At his father’s recommendation, he applied for admission to Prescott College in Arizona, an Outward Bound college that made backpacking an intricate part of the curriculum. Before school began, however, he worked a summer at the 9 Mile Ranger Station in Montana as part of their fire crew, a summer job he would return to for several years. When he finally did graduate from college, it was with a degree in range management. This degree, coupled with his application for the Peace Corps, started Wylie on a lifetime of adventure.

Bruce K. Wylie’s collection of nonfiction adventure memoirs, Adventures in the Bush: Africa to Alaska, has something for everyone who loves the outdoors. There are marvelous tales about animals, particularly the horses Wylie took care of while he was a young boy, cows, bison at the Nature Conservancy in the sand hills of Nebraska, and even a camel named Bucko. I loved his anecdotes about Peace Corps training and the challenges he took on while in Niger. His descriptions of the cultures he encountered and the people he met in China are marvelous. It was Wylie’s trips to Alaska and the Yukon, however, which really excited my imagination. His adventures and misadventures in that wilderness are sure to delight any armchair adventurer, and are complete with sightings and encounters with bears, a wolverine and a wolf -- though I think, if given the opportunity to trace his travels up north, I’d pass on visiting Hornet Lake. Wylie is frank and wryly funny in this outstanding collection of memoirs, written in an easy, conversational style that will have you thinking he’s there in the room, telling you one wild and crazy anecdote after another -- and it’s all good. Adventures in the Bush: Africa to Alaska is most highly recommended.