The Places You Will Be From 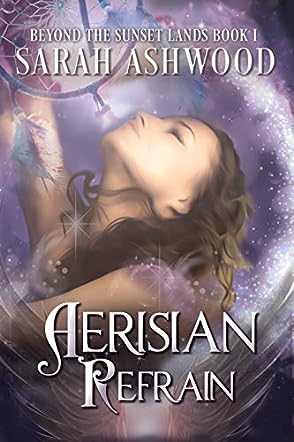 Aerisian Refrain by Sarah Ashwood is the first book in the Beyond the Sunset Lands series. Annie is a superstar with bodyguards and adoring fans, but lately her dreams have turned into nightmares, making her feel trapped. The dreams are the same each time with Annie losing her voice and a presence begging for her help. Convinced by her manager to return to the farm she inherited from her father, Annie boards a plane to return home, only to find herself in the land of Aerisia where she befriends the Artan Hannah and the handsome Cole, a Simathe who saves her life. Her life gets stranger when she calls a dragon to her using just her voice and fairies appear in her room, calling her an abomination. When she discovers the truth about her origins, she learns she has a darkness that could be a threat to her newfound friends. Hannah's husband, the High-Chief of the Simathe, and his second in command, Lord Norband, have already decided she's evil. Both are willing to do whatever it takes to keep Hannah safe from her. As her powers grow, Annie must face the truth of her origins so she can confront a dark presence determined to use her to release an evil long since banished.

Sarah Ashwood tells a story of adventure filled with action, romance, friendship, and magic. Ashwood perfectly weaves mythology into this magical world where Annie is whisked away. Her life of fame shows her as this glamorous singer whom the whole world adores, though underneath this seemingly perfect life is a character with realistic layers. Annie lost her mother to drugs and then lost her father after her career in the spotlight put a strain on her relationship with him. She struggles with both losses while also dealing with her recurring nightmares. She ends up in this other world where she's confronted with magic for the first time in a gritty and dangerous introduction. Despite the danger, Annie is no damsel in distress. She has strength and a strong will and she's not afraid to tell these powerful people what she thinks about them. Ashwood has complex and determined female characters who are layered, emotional, and lift each other up. Hannah is the Artan so she's this savior with the ability to see the good in people and has a compassionate touch, but she's also feisty and firmly stands her ground. Annie and Hannah have an instant bond between them and it grows as the story progresses.

Romance is part of the story and while it's not the focus, it adds charm throughout as Annie and Cole have a dynamic built on friendship and trust which makes their relationship that much sweeter. The chapters shift from Annie's first person perspective to Cole's third person struggle on loyalty to duty and his growing feelings for her. Ashwood incorporates humor mostly through the wit and dialogue of the characters, including fun moments with Annie's accent which adds a charming touch. A book you won't be able to put down until the end, Aerisian Refrain is a story about strength and self-acceptance with strong female relationships, powerful women, and a charming and magical use of mythology.

I loved this book. It's hard to find a good movie anymore because of all the language and actions of the actors but thank goodness for books. I can lose myself in books and I just finished your Trilogy and the first book of Annie the Rockstar.
Loved the characters, love the fact that the story carries through to the same lands and the fact that Hannah has a friend from Earth. Never written a review before, but I've read thousands of books this is the first time I've ever felt like telling anyone else about it. I'm a wife a mother a grandmother and I still love fantasy. It's my way to escape everyday life and you have taken me to a new land in a new time make new friends. Thank you