The Rules of a Little Boss 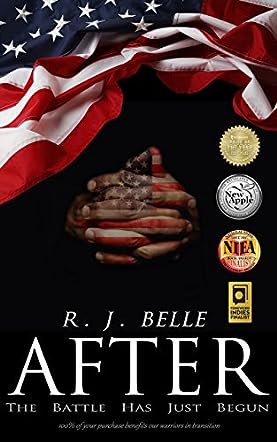 R.J. lives in Southern California with her family. She works on her detective skills by finding her daughter’s lost Shopkins and investigating when her English Bulldogs bark at night. She enjoys writing, reading, running, and coffee.

“For those who gave everything.” After: The Battle Has Just Begun is a military non-fiction read by R.J. Belle. It comprises eight uplifting stories of combat-injured men. Each one emotionally recaps their reasons for joining the USMC, and the tragic circumstances that left them both mentally scarred and physically injured. Their futures seemed vague until they moved to Freedom Station. Sandy Lehmkuhler founded Warrior Foundation - Freedom Station after seeing the needs of injured military men and women. The mission of Freedom Station is to assist, honour and support servicemen and women with quality of life items, various support services, and transitional housing. It assists four warrior groups: the seriously injured returning from war; those suffering from post-traumatic stress or traumatic brain injuries; persons requiring physical or occupational therapy, and warriors who are medically retired.

Freedom Station is a non-profit organization which relies on donations to help these courageous warriors. All proceeds from After: The Battle Has Just Begun will benefit this invaluable program. Over 96% of funds raised are used to assist the injured servicemen and women. The organization is managed by a dedicated team of volunteers. It took a while for me to read the tearful first chapter, a dedication to 1st Lt. Jared Landaker, USMC who died on active duty. R.J. Belle included the recorded conversations she had with the men she interviewed. Their thoughts, pain, and fears were captured in these, thus giving the stories the desired authenticity she aimed for in the book. I strongly urge readers to purchase this book, not only for the act of the charitable cause it is intended for, but for the enlightenment one gets from learning what life outside the USMC can be like for warriors who become injured.