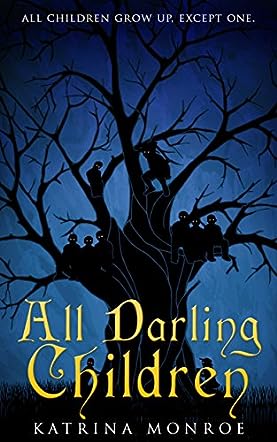 All Darling Children by Katrina Monroe is a dark retelling of the classic story by J.M. Barrie about a boy who never grew up. Madge has one wish: to successfully run away from her Grandma Wendy, and make her way to Chicago to find her mother, Jane. As she takes advantage of the opportunity of her grandma's sudden heart attack, a strange boy, who appears out of nowhere, promises to take her to her mother. Peter Pan flies her to Neverland, an island as twisted and wild as he is. The closer she gets to finding the truth of her past, the more she sees the violent and sadistic nature of Peter as he kills the Lost Boys off whenever they displease him, and kills without remorse but with enjoyment. She finds herself at odds with Peter, and teams up with unlikely allies, Chief Tiger Lily, the ghostly pirates, Hook and Smee, and the seemingly gentle Lost Boy, Slightly, to stop him.

Katrina Monroe has a psychological and dark take on the beloved children's story. As a long time fan of Peter Pan, I have read and seen several adaptations of the story, and only a few took the approach of arrogant and childish Peter as a villain. Monroe brings out the dark underbelly of Neverland, and plays with the dark and twisted psyche of Peter Pan, focusing on his refusal to grow up. Monroe takes the very real parts of Peter Pan that talk about sweeping up blood, and how Peter thinned out the Lost Boys when they appeared to be growing up. The violent nature is mostly seen in his treatment of the Lost Boys, who were lost children that he “was expected to take under his wing, to teach and guide them,” which he does, but he guides them with cruelty and fear, and teaches them violence. Peter is only after power and only enjoys killing, and though he says he loves them, he also has no problem hanging them or throwing them in the ocean.

However, this novel isn't without the magic and wonder that Neverland has always had. Slightly is the biggest example of that wonder, remembering how he had a mother and a sister, and he still maintains his gentle nature. Each of the Lost Boys still has a sense of innocence about them underneath everything twisted and malicious. All Darling Children is a fascinating psychological journey about never growing up, and the consequences that come with immortality. A thrilling adventure that somehow holds onto the wonder and magic of Barrie's Peter Pan while successfully balancing with the darkness and wild nature of Monroe's Neverland.