My Name on a Grain of Rice Jonas and the Mountain 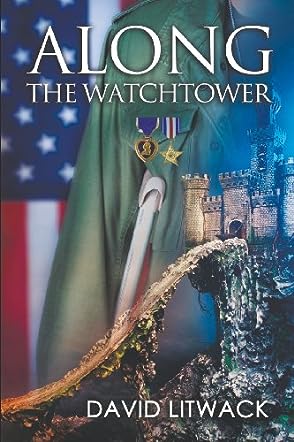 The urge to write first struck when working on a newsletter at a youth encampment in the woods of northern Maine. It may have been the night when lightning flashed at sunset followed by northern lights rippling after dark. Or maybe it was the newsletter's editor, a girl with eyes the color of the ocean. But he was inspired to write about the blurry line between reality and the fantastic.
Using two fingers and lots of white-out, he religiously typed five pages a day throughout college and well into his twenties. Then life intervened. He paused to raise two sons and pursue a career, in the process becoming a well-known entrepreneur in the software industry, founding several successful companies. When he found time again to daydream, the urge to write returned.
There Comes a Prophet, the first novel in this new stage of life, was published in July 2012. His second, Along the Watchtower, will be available in June 2013.
David and his wife split their time between Cape Cod, Florida and anywhere else that catches their fancy. He no longer limits himself to five pages a day and is thankful every keystroke for the invention of the word processor.

"Along the Watchtower" is the story of Lieutenant Freddie Williams who was severely injured by an IED when he was on patrol with his group in Iraq. The story proceeds on two levels: we follow along as he recovers from his injuries in the VA hospital and begins an intensive course of physical therapy to regain the use of his legs; and we are also privy to his dreams, wherein he is the Dauphin, heir to a kingdom, a role he has been in training for all his life. Now that his father, the King, is dead, he must pass a series of challenges and trials. The survival of the kingdom and all its inhabitants is dependent on his successful completion of these tasks. In his waking life, in addition to the challenges he faces as he regains his ability to walk, Freddie carries a load of grief and regret, both for the loss of his comrades back in Iraq and the premature deaths of his parents and brother.

David Litwack's "Along the Watchtower" is a remarkable and timely novel that should appeal to a wide-ranging audience. The parallel stories grab the reader from the introductory paragraphs and keep them enthralled as Freddie progresses through the challenges and trials he faces. "Along the Watchtower" explores the extreme hardships faced by veterans whose physical injuries are often accompanied by brain injuries and emotional trauma. I was particularly interested in Freddie's interactions with the hospital staff and his fellow patients. Choosing the Cape Cod area also adds a lot to the work. From the ocean-front home Freddie shared as a child with his family to the ice-sculptures he visits during his convalescence, the environment is beautifully presented and adds to the enjoyment of the reader. I highly recommend this book and am looking forward to reading more of Litwack's books.

My Father was in World War2 he passed away last year he love to read he got me into reading I know he would love this book.