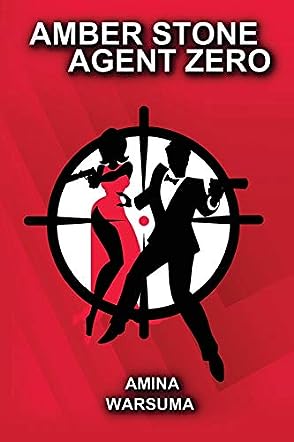 Amina Warsuma has been a creative writer for many years. She started writing, interviews for Andy Warhol’s Interview magazine and The Huffington Post style blog. A former international top fashion model for ten years, she’s lived all over the world and has photographed for Vogue, Harpers Bazaar, and many others. You can view photographs of her on her website http://ablackmodelinparis.com
Amina graduated with an ASS degree in business at Monroe
College in her hometown the Bronx, New York. She graduated at Los Angeles City College for Cinema Production and Producing and attended UCLA for Television pilot writing. Follow her on Twitter https://www.twitter.com/@aminawarsuma. She and her family live in Los Angeles.

Amber Stone: Agent Zero is a work of thriller and espionage fiction penned by author Amina Warsuma. The plot is female focused, bringing an inventive new twist to the spy genre as we follow our heroine Amber Stone into the intriguing world of the DEA in South America. When a standard undercover job turns out to be more than Agent Zero bargained for, our plot expands into the discovery of a worldwide terrorist cell bent on causing chaos and destruction to bring down the current world order. Six women driven to despair by pain are the answer. Amber must face the Daughters of Al-Lat, even when the stakes turn against her and her family in a very personal way.

I particularly enjoyed this spy thriller tale because of its unusual premise, and I felt that author Amina Warsuma brought that aspect to life with emotional depth and some interesting psychological understanding of what it takes to turn someone into an extremist. Whilst Amber herself was a little generic and clean cut as a spy hero figure, the complexities of the plot forced her to test new elements of her character, presenting a mixture of the predictable and unpredictable in terms of the twists and turns of the narrative. I liked the dialogue, which was fresh and honest, free from the old fashioned information overload of older books in the spy genre. Overall, Amber Stone: Agent Zero marks the dawning of a new age of female-led spy novels and it’s a good place to start exploring that genre.

Amber Stone Agent Zero by Amina Warsuma is a masterful blend of sleuth, espionage, and terrorist thriller featuring Amber Stone. Working for the DEA in Colombia, South America as an undercover agent, Agent Zero faces complex situations and meets with characters driven to the extreme by the injustice of their pasts. Having a dubious past herself, how can she reconcile the ethics of her work with a past that continually haunts her?

The author has a wonderful sense of setting and weaves focused scenes that take readers across well-painted landscapes, making them visualize the action as it evolves through space and time. The references to political conflict are compelling and the apt descriptions of both characters and aspects of the setting give the writing an atmospheric character that is, in itself, a huge delight. Character is meticulously accomplished and I enjoyed that the protagonist gets into very tight spots where she has to make split-second decisions. The sense of danger is imminent and at every turn of the story, the reader is hoping for the worst not to happen. Agent Zero is sophisticated and her growth throughout the narrative is interesting, each layer of her personality revealed one at a time.

Amber Stone Agent Zero is gripping, exploring the psychology of a covert agent and a character whose destiny readers want to know. Amina Warsuma's prose is elegant and it is packed with attention-grabbing, humorous, and unusual descriptions. The author uses suspense, unique and powerful storytelling skills, and a tight plot to keep readers captivated throughout the narrative. It's a great story of espionage.

Amber Stone Agent Zero by Amina Warsuma is a thriller with strong themes of espionage and terrorism, a novel that will appeal to readers seeking strong female characters and tightly plotted narratives with exciting locales in the setting. In this thriller, readers are introduced to Amber Stone Agent Zero, working for the DEA as an undercover agent and going through very tight and dangerous situations in Columbia. On the surface, she is a very simple woman, but underneath the calm surface is a past that is as uncomfortable as it is terrifying. Can she beat her dangerous past and find purpose in her new calling?

The narrative begins with wonderful images of the setting. The author offers intriguing details about some of the key characters that readers encounter in this gripping story and situate them in a specific timeline: “In 1975 two baby girls reside in Beirut in the middle of a multifaceted civil war, and they survive the chaos for ten years.” The references to the civil war and images like the ruins in the western part of the city already evoke a sense of austerity and difficult life. Then there are the terrific descriptions that strike the imagination, such as the way characters are presented for the first time: “Emani’s big, hazel eyes gleam through a hijab” and “Heleema is mature and bossy with her sibling with chiseled features resembling their father.” Character development is one of this author’s signature skills and I enjoyed how they peel off in layers until the reader is left with their core. Amber Stone Agent Zero is intelligently plotted, deftly crafted, and rendered suspenseful in a way that it becomes irresistible.

Amber Stone Agent Zero is written by Amina Warsuma. In 1975 a terrorist cell is forming and rebel forces rule the city. Two young girls lose their mother in a car bomb and revenge becomes their number one goal as they grow older. Years later, they join an elite terrorist group under the dictatorship of Queen Niarb, along with other women whose past painful experiences motivate them to seek retribution. Meanwhile, Amber Stone, an African American undercover agent for the DEA in Columbia has finally captured her nemesis drug dealer, Banderos. Amber Stone becomes entangled in a dangerous mission involving the terrorist group when they kidnap her scientist father who has invented a serum which protects the immune system from any attack. Stone must track down the terrorist cell, rescue her father and thwart a possible chemical attack on the West. Stone and Queen Niarb are equally determined in their goal, but who will ultimately succeed?

The brilliant narrative at the beginning of the novel certainly will grab your attention and take you on a spine-chilling adventure filled with espionage and terror. I loved the backstory to each of the characters as it built a great visual picture of their distorted view of the world. I love strong female characters and Amber Stone is a great protagonist. She hides many painful memories of childhood abandonment under her cool exterior. The plot moves forward effortlessly with some fantastic conflicts placed perfectly. The settings evoked great sadness of a world filled with hatred and revenge in the Middle East against the West. I feel this is a great example of how past life experiences can take your life down different paths, depending on the choices you make. The final scenes certainly kept me on the edge of my seat and I am now left wondering what lies in wait for Amber Stone next.