by Carla A. Carlisle, Quadasia Prescod 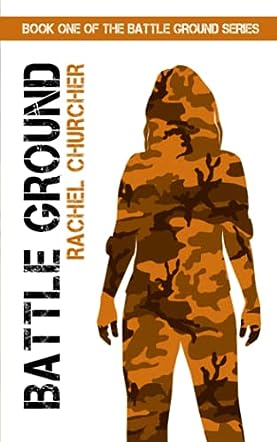 Rachel Churcher is a reader, writer and reviewer of YA books. She's the author of the near-future dystopian Battle Ground Series, she has a Masters Degree in Science Fiction Studies, and she runs a YA Book Club for her local branch of Waterstones. She reviews YA books on her blog (blog.tallerbooks.com), and when she's not writing you'll find her in her home library with a good book in her hand.

The Battle Ground Series is a post-Brexit dystopia, inspired by the 2016 Brexit referendum, the US Patriot Act, and the rise of right-wing governments around the world. The series was a deliberate attempt to create a worst-case scenario for the UK, so Rachel is constantly amazed and outraged as she sees key elements of her dystopia coming true.

You can download a free, no-spoiler prequel to the series from Rachel's website, at freebook.tallerbooks.com - available for Kindle, Kobo, Nook, and other eReaders, and as a PDF. Happy reading!

The British government is abducting teens from school and sending them to training camps to prepare them for military use in the thrilling dystopian novel, Battle Ground (Book One of the Battle Ground Series) by Rachel Churcher. Due to family circumstances, Bex Ellman's school grades suffer, threatening her dream of becoming a doctor. So when her parents place her in a boarding school, Bex is thrilled. Unfortunately, soon the lives of her and her schoolmates take a drastic turn when the military removes them from school and marches them to a combat training camp. It doesn't take long for Bex to realize that something is not right within the camp's command. When she uncovers a deadly government secret that threatens their country, she wonders if the world will ever be right again. Can she and her friends escape the confinement of the camp? If they do, what will happen to them?

Compelling and captivating, Battle Ground (Book One of the Battle Ground Series) by Rachel Churcher is a sensational dystopian novel with a provocative plot and a suspenseful storyline. Set in the UK, the background gives the story a realism that is disturbing and haunting. Skillfully written, the characters are engaging and well-developed, the plot is breathtakingly intense, enthralling the reader from the first page until the last. Brimming with drama, suspense, and action, the story flows at a brisk pace, building to a stunning conclusion. With the elements of violence and murder coloring the plot, this gripping post-apocalyptic novel will captivate readers from the ages of twelve to eighteen and everyone else who relishes thrilling dystopian action thrillers.

Battle Ground is the first entry in the young adult dystopian series written by Rachel Churcher. It is set in a futuristic Britain where an authoritarian regime recruits teenagers from high school and uses them as disposable soldiers in the frontline under the draconian Emergency Armed Forces Act. Bex Ellman is a sixteen-year-old girl whose life turns upside down when she, alongside her best friend Dan, finds herself recruited for the Army and sent to Camp Bishop under Commander Bracken. Bex is subjected to a grueling training regime at Camp Bishop and faces constant harassment at the hands of Senior Recruits, making her life a living hell. But things take a turn for the worse as Bex unwittingly finds herself embroiled in a government conspiracy that changes her worldview forever.

Battle Ground is an engaging dystopian novel that deftly highlights the strategies and policies invoked by authoritarian regimes around the world and delves into their impact on the general populace. Author Rachel Churcher creates an immersive futuristic dystopia that, at times, feels a little too close for comfort to the current political climate and masterfully explores it through the eyes of a teenager. Rachel Churcher also does a commendable job of showcasing the viewpoints of people brainwashed by constant propaganda of autocratic regimes and their justification for blatant disregard of human rights. I found the pacing a bit slow for the first fifty pages or so, but the plot moves noticeably quicker from the halfway point. Overall, I enjoyed Battle Ground, and I would recommend it to fans of young adult novels.

Rachel Churcher’s Battle Ground Series kicks off with its first installment that begins in the life of sixteen-year-old Bex Ellman. Drafted into an army fighting a war with no clear purpose, she forcibly joins a cause that she does not support. But what can she do? She and her friends did not sign up. They are conscripted into a war that is not getting any volunteers. As a young recruit, Bex thinks that their job, as stipulated, is to simply act as deterrents to keep the terrorists away from innocent civilians. When she walks into a town along a busy road that she is familiar with, she witnesses government agents in their extermination of her people by gassing them. Shocked and bewildered, Bex tries to make sense of the truth as to who are the good guys and the bad guys. As she turns against the system, she will have to work to protect her friends, and she knows keeping them alive will not be easy.

As the first book in a series, Battle Ground is filled with drama and tension as Rachel Churcher focuses on the government’s treacherous plot and how the heroine reacts to it. It allows insights into the mind of the teenage heroine as the narrative is written in the first person. Distinct from other young adult series with dystopian themes, Battle Ground tackles disturbing issues that already exist—the use of child soldiers and chemical weapons. The seriousness of such themes is what will make this series appeal not only to young adults but to mature readers as well. Engaging and shocking, this is a series that presents a possible reality we could face in the future, unlike other YA series that pit teenagers against one another in a battle to the death for survival or even just for kicks.

In Battle Ground by Rachel Churcher, set in the near future, the UK has survived Brexit and the independence of Scotland. But now the country faces even more uncertainty over its future. Bex Ellman and her friend Dan have been conscripted into the army to face the ongoing threat of domestic terrorism. Their role is clear, to support the real army and the population, not one another. But when a friend and activist Margie and their history teacher disappear to join the rebels, Bex begins to question whether the truth the government and media are promoting constantly is, in fact, simply propaganda. As Dan and Bex help to build public confidence, slowly the people's ability to think and behave freely is eradicated in order to keep them safe. When Bex is reunited with Margie, Bex discovers she has been helping the enemy all along. Now Bex must uncover the truth and rescue those left behind in the army training camps. But can she defeat the powerful forces who are determined to keep control over the population?

This well-written novel by Rachel Churcher is so compelling and interesting, I was engaged from the beginning. The plot is extremely relevant and realistic but quite chilling too. I loved the diverse personalities of the main characters; they all brought something invaluable to the story. The backstory of Bex caring for her parents really gave an insight into her values and beliefs. The tension as the truth is slowly uncovered was heart-stopping. I thought the excitement and suspense as the teenagers tried to expose the truth was absolutely superb too. I also thought the obstacles they had to overcome were well thought out and would keep any reader on the edge of their seat. The plot also highlights how easily the human mind can be slowly conditioned if the message is continuous and prolonged. People, in general, possess good hearts and empathy and they want to do the right thing. Battle Ground exposes the possibility that if someone with cruel intentions wanted to use that goodness to further their own evil agendas, then many would fall into their trap. The preview of the second novel in the series, False Flag, was a much welcome bonus. A highly recommended read.

Battle Ground is the first book in the Battle Ground Series by Rachel Churcher and it follows a compelling young female protagonist, Bex Ellman. Conscripted into the army, Bex knows she is at the wrong place. Fighting in the army has never been part of her plan, and things only get complicated when she doesn’t fully believe in the cause she is fighting for. She plans to simply get along and to stay safe while protecting her friends. But when she witnesses a tragic, atrocious act and becomes aware that the government is not what it claims to be and that it is ready to sacrifice many lives for a nefarious agenda, she makes a difficult choice. What will she fight for and what chances does she have of surviving, talk less of making the change that she wants to see happen? Now, she is fully involved!

This is a pulsating story that begins with action: “Boots. Armor. Gun. Time to be brave.” It is explosive and the action becomes more intensive from page to page. Told in the first-person narrative voice that reflects the thoughts, world-view, and the first-hand experience of the protagonist, the story explores the hardships of war and the challenges of an austere life. The protagonist is an elaborately developed character that has had her dreams as she grew up, wanting to become a doctor, a teacher, or a leader of some sort. The author does an incredible job in using the stream of consciousness to explore the background of the characters while steeping them in the midst of life-dilemmas and explosive action. I enjoyed the beautiful prose, the skillful handling of character, and the multifaceted conflict. Battle Ground is a tale of war, intelligently written and filled with scenes that are cinematic and engrossing. I fell in love with Rachel Churcher’s characters and the gorgeous prose that is replete with drama.