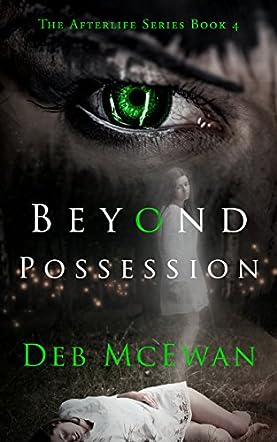 Following a career of over thirty years in the British Army, Deb and her husband moved to Cyprus to become weather refugees.

She’s written children's books (Jason the penguin and Barry the reindeer) and adult books about aliens, the afterlife, soldiers, and netball players.
'Unlikely Soldiers' #1 is set in nineteen seventies Britain. #2 covers the early eighties including the Falklands War, service in Northern Ireland and (the former) West Germany. Book #3 takes a sinister turn of events.

'Court Out (A Netball Girls' Drama)' is a standalone novel. Marsha Lawson uses netball as an escape from her miserable home life and is desperate to keep the past buried. She’s not the only one with secrets. When two players want revenge, a Tsunami of emotions is released at a tournament leaving destruction in its wake. As the wave starts spreading throughout the team, can Marsha and the others escape its deadly grasp, or will their emotional baggage pull them under, with devastating consequences for their families and team-mates?

'Beyond Possession', book #4 in the Afterlife series, is a fast-paced supernatural thriller involving child possessions, reincarnations and telepathic twins, with angels trying to keep the Devil and his evils at bay.

Deb spends her time writing, avoiding housework and playing tour guide. She occasionally blogs about her books. She also tries - and mostly fails - to keep off the pounds.

Beyond Possession examines the question we all ask ourselves. What happens in the afterlife? Deb McEwan has cleverly intertwined many sub-plots throughout the book, but the main plot is around the accidental death of Claire and Ron. Claire dies in a car crash with a man called Ron, and they find themselves stuck in afterlife limbo. Neither has been perfect throughout their lives, but they haven’t been evil either. So where do they go? Heaven, or be condemned to a burning Hell forever? Where Claire goes is dependent on the angels who will decide their fate, according to the actions Claire and Ron take during their missions. While her future is decided, Claire watches her loved ones on earth battle their own demons. The battle is fought between good and evil. Who will win in this roller coaster tale? Demons or angels? Will Claire and Ron reach Heaven?

Beyond Possession was my first supernatural book and I will be reading the other books in The Afterlife Series. Deb McEwan has given us an excellent, thought provoking, fast paced tale of the supernatural. I think anyone who has lost someone dear to them would find comfort in this version of the afterlife as loved ones return to watch over you. I loved the humour of the devil summoning his committee of most evil demons. The description of the torture of bad souls was blood-curdling. This book has something for everyone: comedy, the supernatural, and even a love story thrown in. There are twists and turns to the plot throughout and I read this book in one sitting.

Writing about the afterlife is a challenge. No one on this side of existence has seen the other side. A lot of people would even say that there is nothing after death. That is even the official government policy in China. But people have been hoping, even insisting that there must be something more from the very beginning of human history. So, writers have attempted to describe what life might be like there. I have read a lot of these books. They are interesting, and when they are done well, there is a lot to think about and talk about. There are many approaches you can take to write about the afterlife.

I like the approach Deb McEwan has taken in Beyond Possession: The Afterlife Series Book 4. I like the tone. It is funny, almost irreverent, but it just tiptoes up to that line. It doesn't cross it. It looks at deep questions from the perspective of everyday people in extraordinary situations. I liked it. I liked the characters in Beyond Possession: The Afterlife Series Book 4. I feel they are the greatest strength of the novel. Don’t get me wrong, Deb McEwan can write. She writes very well, and that skill is at the forefront as characters interact. Setting is done well and the situations, plots, and sub plots are great too, but the characters are what sold me on the idea that maybe there is an afterlife. And that if I have time, I should read the first three books in the series.

Beyond Possession is the fourth book in Deb McEwan's The Afterlife Series. There are angels and evil souls. While angels are trying to maintain peace in the world and keep the evil spirits away from the good souls, the devil's minions are trying everything in their power to increase chaos. Amidst this battle between good and bad, there is a fight for authority amongst the angels. One of many chores of angels is to ensure the smooth birth of a soul into the world; however, when one of such soul birthing operations (of Val) went amiss due to an over-confident angel, somehow Val entered into the body of a child named Daisy (who loved being called Ninja). Her family noticed a behavioral difference in Ninja, but were unable to put their finger on the problem. With Val being in Ninja's body, Ninja's own soul got stuck with nowhere to go. With evil souls -- Harry and Goth being the two most active -- on a mission to create as much trouble as possible, it's imperative to rescue Ninja.

The author has done a fabulous job of presenting her perspective on angels and evil souls. The angels are not filled with miraculous superpowers. They are struggling with the fight between the devil and God. They are always on the move and are following the orders of a committee. They are punished for not being obedient. Apart from all this, they must respect a hierarchy. They are promoted and demoted, according to their actions. One might think that all this would have taken away the angelic factor of the angels, but that would not be farther from the truth. There is a vibe about these beings that distinguishes them from humans. They take away all the darkness and spread happiness all around. The expectations by a reader of a character show great writing skills. The author managed to convince me that the angels would fix everything. The opposite is true for evil souls. The author managed to produce a fear of evil in my mind. I was convinced that these evil minions would harm many people.

The paranormal parts are spread throughout the book, but they could be more horrifying. If you are a fainthearted person like me, then you would start sleeping with one eye open; however, if you are an avid horror reader, you would not be frightened by the paranormal activities. This in no way demeans the gripping plot of Beyond Possession. I could not put the book down without knowing what happened to all the characters. If you think it's only about angels and evil, it's not. Human characters share an almost equal space with these divine beings. This implies the presence of a range of emotions, envy and love being the two most compelling emotions. I would recommend this book to readers who like a quick paranormal story with a gripping plot. The author has written a story that will not disappoint readers.