A Leaf in Wind and Water Or, the Unwritten Memoir of Tennyson Middlebrook
by Martin Kee
Fiction - Horror
332 Pages
Reviewed on 09/16/2013 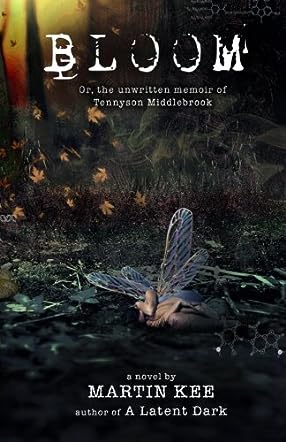 Martin Kee lives with his wife and several small furry animals. He is currently hard at work writing novels while trying not to become one of his charcaters.

Martin Kee’s new novel, Bloom: Or, the unwritten memoir of Tennyson Middlebrook, is a horrific and fantastical story that will keep readers turning the pages for more. All that Tennyson Middlebrook knows and loves about his world is coming to an end. There are strange reports of a mysterious black substance in the ocean, creeping closer to the shore every day. Tennyson does not think much of it until he and his friend, Allison, stumble upon the dead body of an elderly neighbor covered in the strange fungal growth known as "bloom." War is coming and when the enemy is a disease only a few survive. Allison is caught in the middle of this outbreak, inexplicably drawn by a voice only she can hear, but Tennyson never gives up hope that one day he will find her, or die trying.

In a strange new world, Lil’it is nothing. She is “feh”, the sound one makes when dismissing something that is useless or repulsive. Her glimmering wings and small, but perfectly formed body is beautiful, but deadly. The feh are feared, because one bite from them could mean death. With the ability to manipulate someone’s DNA into a perfectly tuned disease, the feh can conquer any enemy if they get close enough. But, the world is dangerous for Lil’it. Fehs are prized for the magical powders and medicines their wings and organs can be used to create. Lil’it's life is about to change, however, because little does she know that her story is entwined with another’s and when the two meet the world will never be the same.

Bloom, by Martin Kee, was a wonderful tale to read. It was exciting, gritty, and action packed. Kee immediately pulls the reader into the story and doesn’t let go until the very end. I’m not going to lie, this story made me squirm quite a bit, but in that fabulous way that a good horror story can. As a fan of both fantasy and horror genres, I was thrilled by Kee’s ability to seamlessly blend the elements of both throughout. Bloom is definitely a story with surprises that will keep readers guessing until the very end. I highly recommend this book and hope to read more by Martin Kee.