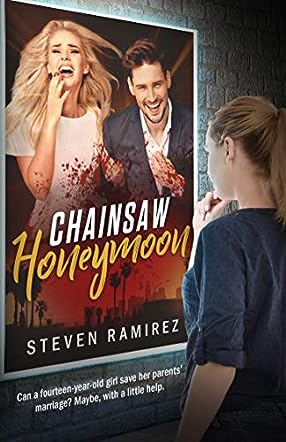 Steven Ramirez is the author of the acclaimed horror thriller series TELL ME WHEN I’M DEAD. A former screenwriter responsible for the funny, bloody, and action-packed movie ‘Killers,’ he has also published CHAINSAW HONEYMOON, a comedic young adult novel, and COME AS YOU ARE, a horror collection. Steven lives in Los Angeles. He enjoys Mike and Ikes with his Iced Caffè Americano, doesn’t sleep on planes, and wishes Europe were closer. www.stevenramirez.com

Life, love, and a few dead bodies litter Steven Ramirez’s Chainsaw Honeymoon. Ruby, a bright, funny fourteen-year-old, is on a mission to reunite her estranged parents. But they’re proving to be a hard nut to crack. During summer vacation at her dad’s house, she watches as he tries to put together a home movie designed to win her mom back to the family. The movie stinks, but the idea isn’t so bad. She and her mom, Stacey, are horror fans. That, together with her dad’s movie gives Ruby an idea. She rounds up her two best friends, an arrogant filmmaker, a bizarre collection of actors, and a chainsaw-wielding movie killer to create a movie guaranteed to reunite her parents. What could go wrong?

Following the success of his zombie horror series, Tell Me When I’m Dead, Steven Ramirez keeps the proverbial ball rolling with a rollicking piece of comedy, horror, romance, and drama in Chainsaw Honeymoon. The characters are so true to form, each one of them will be recognizable to a large majority of readers. Along with the romantic aspects, the drama, and the horror, Ramirez throws in lots of humor. Whether your favorite form is surreal, tongue-in-cheek, word play or hysterical, you’ll find ample portions of each to keep you laughing. The pace is fast, told from several points of view, and full of surprises that make for an unforgettable read. Well within the bounds of acceptability regarding the horror, sexual, and emotional scenes and situations, I highly recommend Chainsaw Honeymoon for readers fourteen and up.