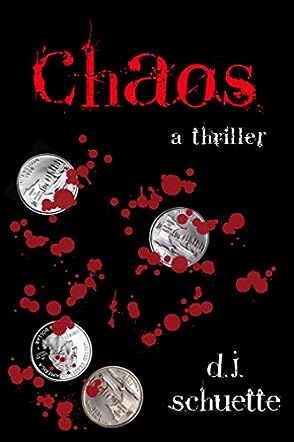 Fans of the TV series Criminal Minds are going to love Chaos by D.J. Schuette. In fact, some of the characters in this thriller will immediately bring to mind those members of the BAU fans have come to love e.g. Chaos’ autistic boy genius, David, will have you thinking of Dr. Spencer Reid and, though she’s older, Valerie reminds us of the delightful and caring Penelope Garcia. But, except for the way the unsub’s profile is presented to the police force in Chaos, that’s where the comparison ends. In the best of psychological thriller tradition, D.J. Schuette pits a brilliant FBI profiler, Nicholas Keegan, against an equally brilliant, but deranged and narcissistic psychopath, Aleksandr Zorin. Zorin is a cold-hearted and prolific killer whose methodology is bloody, brutal and, unfortunately for those trying to find him, variable. The only similarities between the murders that Keegan and his team can see is that the bodies are left face up with a quarter in each hand and one on each eye. Why? What is the significance of these quarters to Zorin? And why does Zorin empty the jewelry boxes of wealthy women but leave their daughter’s jewelry untouched? If Zorin is not motivated by riches, what is his motivation?

Apart from an intense plot that kept me riveted, what I liked best about Chaos was the realistic characterization. While Keegan is a top level profiler, he is very human: he loves his wife dearly but suffers with guilt over how his job interferes with their relationship. He doubts his ability to be as good a father as he is a cop. Zorin, by contrast, has no doubts about his skills, but the explanation for his twisted mind and actions is rooted in his upbringing. This realistic approach to the characters and action in Chaos gives the story authenticity and credibility. These characters have depth. Schuette’s depiction of how the FBI works, though again reminiscent of Criminal Minds, is both interesting and enlightening. But one of the most fascinating things I discovered about D.J. Schuette is his website. There you will learn a lot more about Aleksandr Zorin, and about the musings and interests of this talented author and editor, whose next book, Maelstrom, takes off where Chaos ends. If you liked Chaos, Maelstrom promises more great reading. Watch out for it.