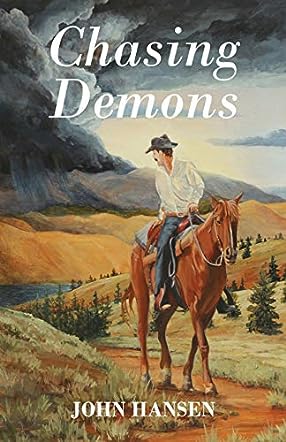 Chasing Demons by John Hansen is a military romance in which Gus O'Grady is trying to rebuild his life, but things are very much out of his hands. In a story set in the 1870s, Gus has given his everything to his country and people for 13 years. The war, the blood, and all the fighting have taken a big toll on his mind. He drinks to keep himself sane, but it has cost him his career and his social standing. He is now just trying to hold onto his old self and becoming a deputy sheriff helps him somewhat. However, the real difference comes in his life when he meets a woman.

This little woman showed him that there is more to life than just drinking and cursing his past. She has demons in her past too, but she is strong enough to rise above them and make a difference in her life. Being a single mother has only helped her become stronger. She and her son make a big difference in his life. Nevertheless, even this respite is threatened when an old ghost from his past comes back into his life. Can he hold onto his present and future or will his past become too strong to fight?

This is a western novel and I loved it to bits because it had everything I loved. It has strong characters, a good storyline, amazing settings, and a fabulous narrative. This is everything that every reader wants. I loved the way Hansen portrayed the characters, intensified their development, and made them relatable. This is definitely a novel that I would read again and again because it had pace, it had attraction, and it had a personality of its own. Amazingly well done.