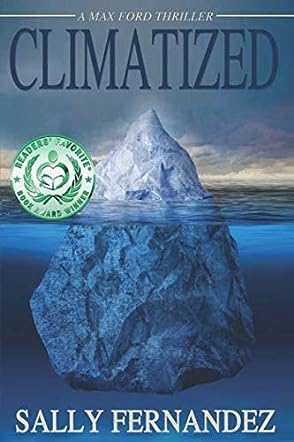 As a novelist of provocative political thrillers steeped in facts, Sally wasn’t always twisting facts with fiction. Heavily endowed with skills acquired in banking, she embarked on her writing career. Her books of fiction also reflect the knowledge garnered from her business experiences, while living in New York City, San Francisco, and Hong Kong.

Sally’s foray into writing fiction officially began in 2007 when the presidential election cycle was in full swing. The overwhelming political spin by the media compelled her to question the frightening possibilities the political scene could generate. As a confirmed political junkie, she took to the keyboard armed with unwinding events and discovered a new and exciting career.

Climatized is the first novel in the “Max Ford Thriller” series, soon to be a major motion picture, featuring Maxine Ford as the female protagonist. The second book in the series is The Beekeeper's Secret. Her prior series, “The Simon Tetralogy,” is comprised of Brotherhood Beyond the Yard, Noble’s Quest, The Ultimate Revenge and Redemption. Each book provides an exhilarating platform for the next, with a gripping narrative that challenges the reader to put the book down. Her development of the other characters has created a lasting bond between them and the reader, especially now that Max has taken center stage.

A world traveler, Sally has visited every continent and over fifty countries. Sally and her husband, also the content editor-in-residence, continue to travel extensively throughout the world.

Climatized: A Max Ford Thriller by Sally Fernandez follows the story of Max Ford’s first investigative case as a private investigator. Senator Sherman Spark dies mysteriously and his wife, Isabelle Spark, refuses to accept the official version that her husband committed suicide. Max takes on the case and finds herself embroiled in a conspiracy she could never have imagined. Three scientists coincidentally die, all three due to give evidence relating to climate change and global warming. When a fourth scientist goes missing, Max realizes that his testimony holds the key to the unbelievable and complex conspiracy that is unravelling before her eyes. She sets off on a quest to find the fourth scientist before he, too, is disposed of. What she discovers is for the president’s eyes and ears only, but can she get the information to him without losing her own life in the process?

Climatized literally starts with a cliffhanger and builds intrigue from the outset. The characters are well defined and given credibility by the well-researched factual aspects woven into the story. The author, Sally Fernandez, has crafted a detailed and plausible novel that has the reader wondering whether they are reading fact or fiction, which is a tribute to the writing skills of this author. I was enthralled from the beginning; this is truly a page-turner and impossible to put down. The settings and scenarios are well described and well written with visual descriptions and authentic characters. Certainly an author to read more of, Sally Fernandez does a very credible job in Climatized and Max Ford is a key character to follow.

Climatized: A Max Ford Thriller by Sally Fernandez is a novel with strong hints of a political thriller, a narrative that is as relevant as it is intriguing, and a delightful read for fans of sleuth and gritty investigation stories. We get hints of the setting at the start of the novel, a time when everything had changed, the country had stabilized and “support for the president’s plan had gained momentum. America was once again sailing on course.”

Maxine Ford is a retired Intelligence Agency director, a skilled investigator who can't put aside her passion to dig for the truth. When the wife of a well-loved senator hires her to investigate the untimely death of her husband, Max begins to uncover very unsavory facts. Three renowned scientists scheduled to testify before the senator's investigative committee are murdered a few days before the date of the testimony and the fourth one is missing. Max and her associate are about to face a powerful cabal that could be behind the killings and the threat of a multi-trillion dollar business industry. With compelling evidence, will the president make the choice to bring down a ruthless organization or take the easy way out?

Sally Fernandez has crafted a gripping thriller with an exciting cast of characters and has successfully woven the themes of global warming, crime, and sleuthing into the narrative, making the story relevant and realistic. The story has strong plot points and nothing —and I mean nothing — is what it seems. I enjoyed the characters, especially Maxine and Jackson. The characters are real and their humanity is deeply explored. The author keeps the story deft and balanced, skillfully introducing suspense and holding the reader’s interest through each page. Climatized: A Max Ford Thriller is the kind of book that keeps the reader on the edge of their seat, told in a hypnotic voice and structured to propel readers from one exciting chapter to the next.

Climatized is a high octane political thriller by author Sally Fernandez, and part of the Max Ford Thriller series. Max is a woman on a mission with an extensive career in various fields of intelligence work. Determined to break out from the corporations and powers that she’s been working for, Max sets up as an independent private investigator. The wife of a dead politician hires Max when the police want to sweep her husband’s death under the rug, and the plucky investigator soon discovers that there’s a conspiracy regarding climate change that the victim was involved in. As scientists become victims too, Max finds herself trapped between politics, big business and the truth of global warming, with a terrible decision to make.

I think that the concept of climate change really makes this an apt and bang up to date thriller for the modern age. Sally Fernandez presents the corrupt ideology of big money business and its connection to politics with a sharp intellectual eye, but she never loses sight of providing plenty of action and interest in the tale for readers either. Max is a tough investigator who doesn’t let her gender get in the way of progress, and I really respected the fact that the book didn’t become solely about her as a woman. The events unfolding in this thrilling mystery are far bigger and more frightening in a realistic way, and I felt they were done true justice throughout the novel. Overall, Climatized is a highly recommended, intelligent and exciting read.