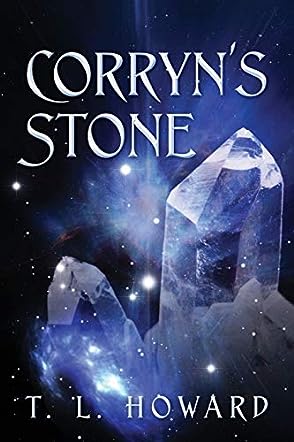 T. L. Howard has been fascinated with the “what-ifs” all her life, sometimes to the point of distraction. She is now well into adulthood and still can't stop asking that question. She was born and educated in the state of Nebraska and currently resides there where she is employed at the university. Corryn’s Stone is the long awaited sequel to her first novel, The Crystal Key. When not writing, which is seldom as demonstrated by her bad housekeeping, she enjoys needlework, walking, and a good movie.

The eternal battle between good and evil is played out through the characters on the side of Deceris, goddess of the Light and those of Belamon, god of the Dark. They join forces against Lord Faldyn, the pawn of the damned souls of Aeyrebis, and his followers, the Partisans. Corryn's Stone by T.L. Howard is an exciting epic that incorporates creation stories, the lure of power and the folly of greed across millennia and different races of people. After years of distrust, Orsans and the citizens of Edos are both subjected to the threat of annihilation through the dark powers of Faldyn.

The ‘Chosen’, the human representatives of Deceris and Belamon, Mirah and Rasmun, must put aside their differences to fight the growing menace set to destroy the world within months. Tasked with carrying out a quest to complete the mission of the ancient cleric Corryn, the Chosen must destroy the books containing the condemned souls of the Delni and Delnos who lost the favor of ‘The One’, the original ‘Creator’. This partnership is fragile, given the former adversarial relationship between the commanders of the opposing sides, and fear of deceit and trickery keep everyone on edge. Through patience and total faith in their respective gods, along with help from a vast support network, the quest proceeds. Will truth win out or will the forces of hate and revenge manage to finally bring about the end of the world?

Corryn's Stone by T.L. Howard is, without a doubt, a terrific book with a riveting storyline that combines excellent characters, exciting action, tremendous imagination, vivid descriptions and a wide range of emotions. Deep faith is a key theme throughout the book as is the concept of universal balance and respect for nature, but both are treated matter-of-factly and in harmony with the overall plot. This is a wonderful book that stokes the reader’s interest and portrays a world of incredible options.