by Ryan A. Kovacs I Stood Among the Ruins and Cried 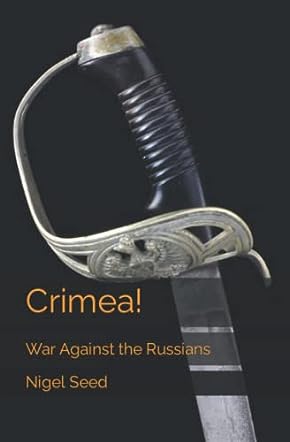 Crimea! War Against the Russians is a continuation of author Nigel Seed’s excellent tales of Corporal Thomas Mason and his adventures in the British Army. Thomas and three of his colleagues were selected as escorts of the famous Koh-i-Nor diamond from India to England. Accompanying Lieutenant Warren back to England, they discovered the lieutenant’s father had managed to raise the funds necessary to purchase a commission in the British Army proper for him. He offers Mason and his three companions an opportunity to join him in the regular army and Thomas, realizing that England holds nothing for him except the possibility of the hangman’s noose, readily agrees, enlisting in the Rifle Brigade. England is now at war with the Russian Empire and Thomas joins the rest of the troops as they settle in for the long voyage to Crimea, arriving eventually at Gallipoli. They watch their French allies disembark their troopships with calm order and discipline. This will contrast with the British troops' disembarkation and set the scene for the English leadership’s catalog of errors and poor planning as they set forth to engage the Russians in a war that will prove very different from the team’s last battles in the heat of India.

Having just finished reading Nigel Seed’s excellent tale of the Punjab, I was excited to be able to continue Thomas’s exploits in the next chapter of his military journey in Crimea! War Against the Russians. This war proves to be every bit as different from the Indian wars as was possible. The cold, wet, miserable conditions faced by the soldiers were in sharp contrast to the heat and smells of India; however, the action, the bloodiness, and the suffering were as poignant and sad in both theaters of war. I really appreciated the author’s willingness to highlight the shortcomings of the British leadership, especially that of Lord Raglan, who it appeared had absolutely no idea of soldiering or indeed warfare in general, preferring to hide aboard his private yacht, commanding from a distance, at least until he too fell prey to the greatest killer of them all on this filthy, vermin-infested battlefield – cholera. Despite the immense bravery of the common soldiers on all sides of this war, allies and foes alike, it was clear that had the British and French navies not possessed superior equipment in most areas of the conflict, the outcome of the war could have been very different. I was pleased that the work of all the nurses and women, not just that of Florence Nightingale at Crimea, was highlighted. They played an enormous part in keeping the soldiers' morale high despite the appalling conditions.

This is a fantastically quick and incredibly exciting read that pulls no punches when describing the horrors of the Crimean War. I can pay this author no greater tribute than to assure him I will be reading the third and final installment of Thomas Mason’s thrilling army adventures just as soon as it becomes available. I can highly recommend this book, this series, and I’m sure everything else written by this highly talented author.