Marty’s Fellowship of the King’s Armor A Study of Rusalki - Slavic Mermaids of Eastern Europe In the Shadow of a Valiant Moon Ella Says: It's Cool to be Different! 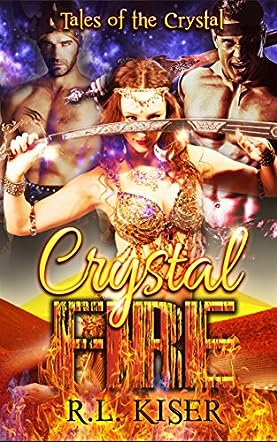 R.L. Kiser is the author of the Tales of the Crystal trilogy, an epic fantasy set in a magic realm of sorcerers, heroes, villains, and legends. These are tales of extraordinary people in extraordinary times, overcoming adversity and finding new strengths. His other works include The Prophecy of Tara (A Mystical Fantasy), the Educated Injun series, and Exile-A SciFi Adventure.
Born in Idaho, raised in Arizona, grew up in Los Angeles he's a Vietnam Veteran, been a musician, a Hollywood taxi driver, a computer programmer, a single parent, and ran his own Internet marketing business. He holds an associate's degree in computer science.
He currently resides in Reno, Nevada with three computers and a bicycle.

His novel Exile-A SciFi Adventure received a five star review and made the first cut in the 2013 Amazon Breakthrough Novel Awards.

Crystal City is one of the world’s wonders and a neutral meeting place for the rulers of different realms powered by the Crystal, the center of all civilizations. Now the Crystal and the city are under attack by some unknown force. Rowan, the former captain of the Crystal Guards, and the other warriors are needed yet again after their last devastating battle. Written by R.L. Kiser, Crystal Fire is the first installment of Tales of the Crystal series.

I was intrigued with the story from the very beginning and absolutely love how Rowan – who is living his life in disguise – is introduced. Who is this mysterious ‘old man’ that possess some magic in him? What is his story as someone who defended Crystal City several years before? R.L. Kiser has written chapter one so deftly to reel in readers’ curiosity to keep reading. Subsequently, we are taken on a fun little voyage where we meet the other warriors who are also living their lives secretly amongst the ordinary folks. Of course, no fantasy novel is complete without ethereal beings and Crystal Fire is no exception.

Characterization is superb; both heroes and villains have flaws which also lead to humorous moments. As a fan of the fantasy genre, the premise of the story is rather familiar to me. However, the way the plot is developed is fresh, coupled with unpredictable and interesting twists. Kiser’s flawless writing style helps keep the plot tight throughout the story as well as maintain a good pacing. On the whole, a satisfying read and a great start for a series.