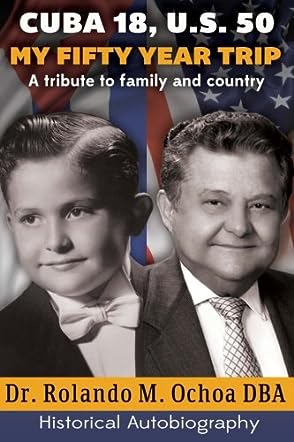 Reviewed by Randy B. Lichtman for Readers' Favorite

The wonderfully written historical autobiography, Cuba 18, U.S. 50 My Fifty Year Trip: A Tribute to Family and Country, by Dr. Rolando M. Ochoa, DBA, a Miami Dade College professor, recounts a very engaging and interesting lifetime of experiences. This inspiring memoir takes us through Dr. Ochoa’s fascinating life, starting from his early experiences as a child television star in Cuba, through his service with the U.S. Army in Vietnam, his professional life in the ever-changing banking industry, and today his role as a committed business educator for Miami Dade College. The author conveys his journey with internal reflection and humor, describing the many life events that have profoundly affected his personal and professional life.

The son of Rolando Ochoa, a famous Cuban TV entertainer, the author (who shares the same name) became a child star when he appeared on his father’s TV program, which was the top-rated TV show in Cuba at the time. The younger Ochoa continued to play an important part in his father’s show until the family made the choice to leave Cuba early in Fidel Castro’s reign. The author describes the challenges his family faced as political refugees, his father’s inability to continue his television career as they awaited their immigration to the United States, and the many obstacles he and his family experienced after immigrating. Learning about this period of history from the author’s personal point of view greatly enriches the reader’s understanding, as it will for those wishing to further their knowledge of these important historical events.

Ochoa’s life in the U.S. military, and his spiritual impact on soldiers as he assisted chaplains during the Vietnam War, brought together his great religious faith with his military life. During the Vietnam War era, when many Spanish-speaking soldiers wanted to attend a Catholic Mass, but the chaplain was not able to speak Spanish, Ochoa provided those services under the guidance of the chaplain. In fascinating detail, he describes how the military misplaced his papers just as he was about to enter Army Officer Candidate School, and how this turn of events led him to accept a position assisting those chaplains.

Next, his experiences working in the banking industry for over 30 years, from the 1970s to 2000s, is interesting from both a personal and a professional perspective. While he offers a highly personal account of family love and support, he also recalls the many changes that affected the banking industry during this time, again enhancing the book’s historical value to those wishing to learn more about this unique era. Throughout, he expressed how his underlying faith continues to be a driving force in his life and a major support for him and his family. Ultimately, Dr. Rolando M. Ochoa’s book tells the very engaging story of a true educator who continues to make a difference in the lives of many. He succeeds in sharing his experiences, expressing his perspectives, and educating his readers through this very personal, warm, informative, humorous and inspiring memoir of his life. Highly recommended!